In an interesting new article by Huffington Post, we find out how common emoji templates differ across varying companies, with Apple’s emoji characters being the best in class. Apple’s emoji set, which is much more elegant and artistic than what’s available from Google and Twitter, lets iOS users express themselves with all sorts of quirky, helpful, and flat out weird icons. 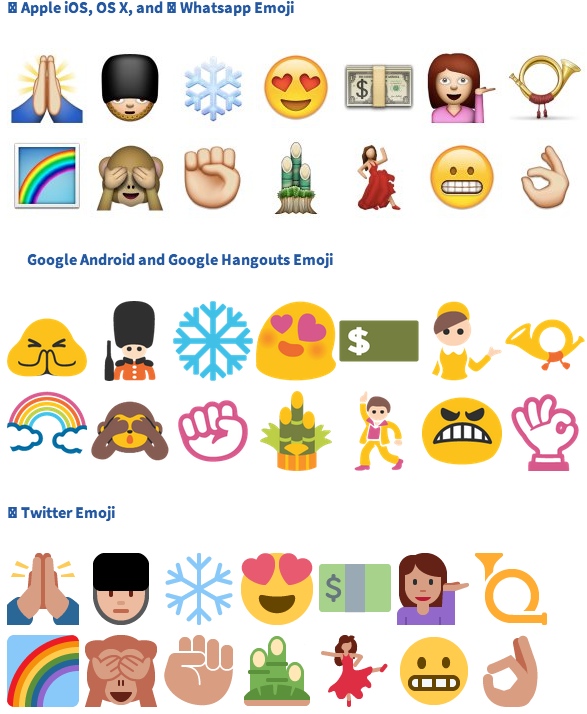 Apple has a long history of rich and detail-oriented icons. As seen above, its hard to dispute that Apple’s emoji are way better than the competition. Willem Van Lancker, a former Apple employee who designed hundreds of emoji for the iPhone, said he was dismayed to find that on Android devices, his icons’ counterparts almost seem to mean a different emotion. “It’s a lot like spoken languages,” he said. “Things are lost in translation.”

Lancker further explained that in coming up with Apple’s set of emojis, designers at times took a look to Japanese emojis for inspiration and reference points:

“Van Lancker said Apple consulted the Japanese originals, but the look of each emoji was ultimately up to its designer. “To be honest,” he said, “when there are hundreds of these to be made, some of them were made in 30 minutes.” Even in their rush — or perhaps because of it — Apple found opportunities to turn emoji into branding opportunities for the mothership. The emoji for “headphones” is Apple EarPods. The two calendar emoji match Apple’s Calendar app. And every smartphone-related emoji pictures a device that evokes the iPhone.”

For more interesting tidbits on emoji, we suggest you read the full article here. It’s quite a read.