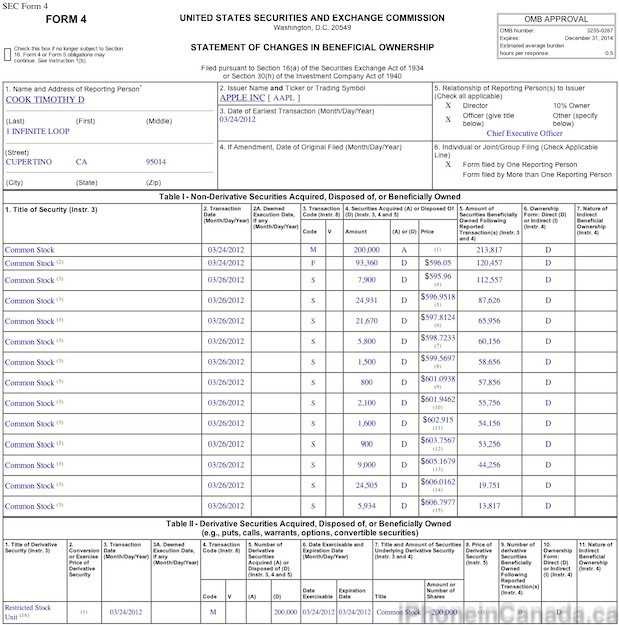 With AAPL shares hitting an all-time high of $614.48, now is the perfect time to sell, right? Apple’s stock market valuation already makes it the largest company on the planet, with a market cap of over $572 billion.

SEC Form 4 filings today have revealed the Apple executive team netted over $314 million dollars from the sale of over 526,016 shares, in transactions that took place from March 24-26th. Here’s a breakdown of shares sold by each executive:

We first noted in early March Apple CEO Tim Cook netted over $11 million in the sale of Apple shares as well. If you add in the sale of his shares revealed today, that is over $130 million made by Cook in the month of March alone.

On September 26, 2008, Tim Cook was awarded 200,000 RSUs; those were vested on March 24, 2012–as was the case for the other executives as well. Peter Openheimer had the second highest total with almost $90 million dollars from his sale of shares.

Back in August of last year, Tim Cook, as the freshly minted CEO was awarded 1 million restricted stock units, with vested dates to materialize in 2016 and 2021. Tim Cook was recently spotted in China, where it was confirmed he met with government officials. China has emerged as one of the biggest markets Apple continues to capitalize on.