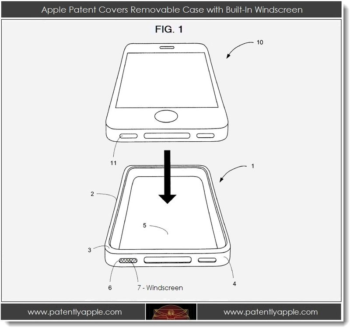 Earlier today the US Patent & Trademark Office published a patent application from Apple. The patent is for a specialized case that contains a built in windscreen which will reduce the wind noise while the user is making a phone call.

The case is designed in two parts, an inner part and an outer bumper. The outer bumper contains the windscreen. The windscreen will likely be made of an acoustic resistive material that will reduce wind noise without altering the user’s voice. The patent wasn’t specific on the material but it will likely be made of cloth, acoustic foam, porous plastics or screen material.

2. Originally filed in 2008: Power Source having a Parallel Cell Topology