A new Apple patent titled “Fusion keyboard” published today by the U.S. Patent and Trademark Office reveals a dual-purpose keyboard that features capacitive touch sensors as well as depressible mechanical keys with ‘multi-stage switches’. According to AppleInsider, the invention, which offers users both multitouch gesture control and conventional keystroke entry without having to remove their hands, may replace touchpads in future devices. 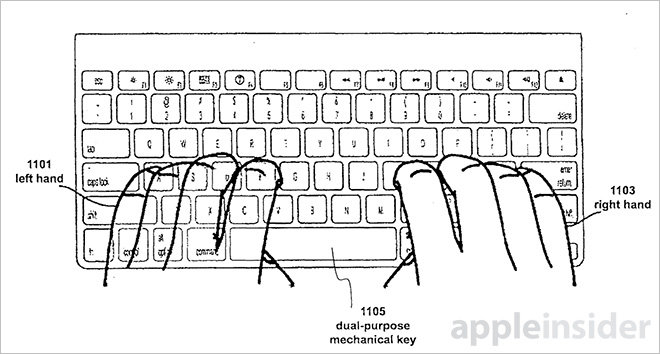 Apple details that with touch sensitive key surfaces, the proposed keyboard can detect finger gestures like taps and swipes, similar to the way MacBook’s touchpad does, allowing users to point, click, scroll, drag, select and zoom by simply moving their fingers over an array of touch sensitive keys. Furthermore, input from each of the user’s hands is processed individually, meaning one hand can enter text data via key depression, while the other manages cursor control through touch events.

In one embodiment, pressing a key down to a first level results in a conventional text output signal, but depressing the same key to a second level generates a different command signal, like a mouse click. On the hardware side, the tactile key press experience is accomplished via a double-dome switch or membrane setup with two or more detents” 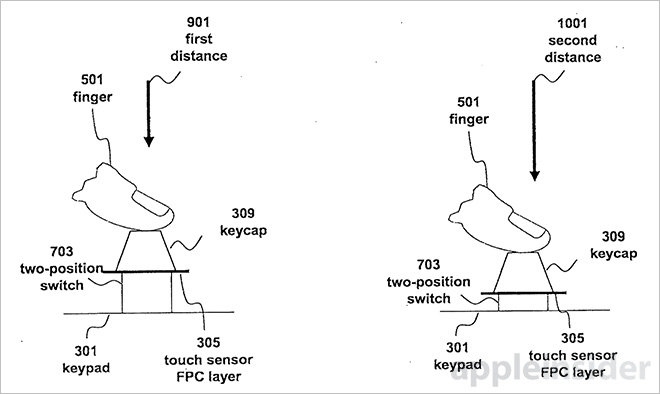 The fusion keyboard patent was first filed for by Apple in September 2011.