The US Patent & Trademark Office has today published an Apple patent application relating to an advanced “Guidance System” for autonomous vehicles, that includes user precision gesturing on an iPhone, Patently Apple is reporting. 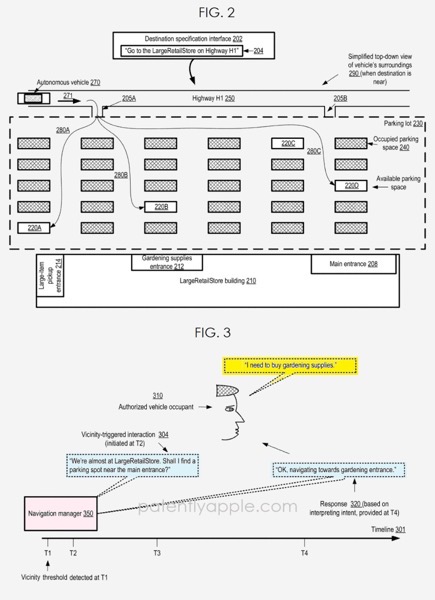 Apple notes that providing interfaces for the guidance of self-driving vehicles that are intuitive and easy to use may prove challenging. Apple’s proposed system allows an individual to use a touch-sensitive interface, such as an iPhone display, to mark an intended stopping point, trace a path towards a particular area, and much more.

In one example, Apple also illustrates how movements of an autonomous vehicle in the vicinity of a destination may be guided at least partly by intent signals provided by an occupant of the vehicle.

In some embodiments, the signals may comprise a voice command using Siri to indicate a landmark or sign which may be visible from the vehicle, such as the equivalent of “Park near the gardening supplies entrance” or “Park near the cafeteria entrance.”