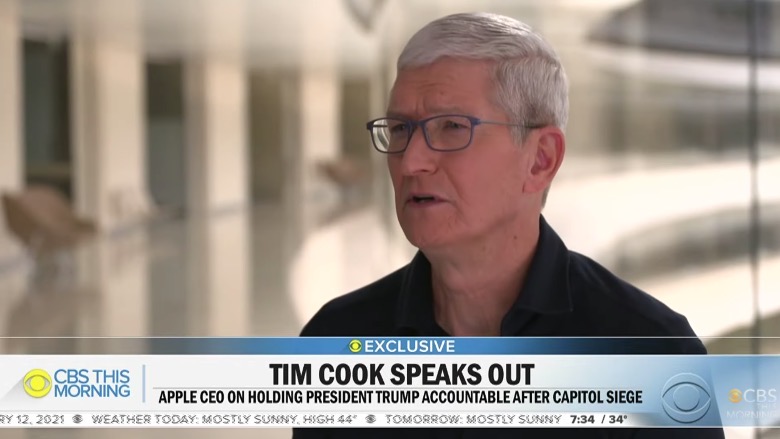 Apple CEO Tim Cook was interviewed by Gayle King from CBS This Morning, and part of the discussion was previewed today in the United States.

When asked about the insurrection at the Capitol, Cook said, “I think it’s key that people be held accountable for it, this is not something that should skate. This is something that we should be very serious about.”

King pressed if President Donald Trump should be held accountable for urging his supporters to march on the Capitol.

Cook didn’t mention Trump specifically, but answered, “I think no one is above the law. That’s a great thing about our country, we’re a rule of law country. I take everyone that had a part of it needs to be held accountable.”

The Apple CEO agreed people need to held accountable for what happened, noting the U.S. should not let it go.

A more in-depth interview with Cook is set to air on Wednesday, January 13, 2020. King also teased Apple has a “big announcement” set for tomorrow, but emphasized it would not be a new product—but is something “bigger and better than that”, adding it was “very exciting news”.

The interview is embedded above—it requires a VPN to watch it since it’s only viewable in the U.S. and not available in Canada.