It appears Apple has hired another known auto industry veteran, according to The Wall Street Journal. Former chief of global quality at Fiat Chrysler, Doug Betts, joined Apple this month, according to this updated LinkedIn page:

Doug Betts, who led global quality at Fiat Chrysler Automobiles NV until last year, is now working for the Cupertino, Calif.-based electronics giant but declined to comment on the position when reached Monday. Mr. Betts’ LinkedIn profile says he joined Apple in July and describes his title as “Operations – Apple Inc.” with a location in the San Francisco Bay Area but no further specifics. 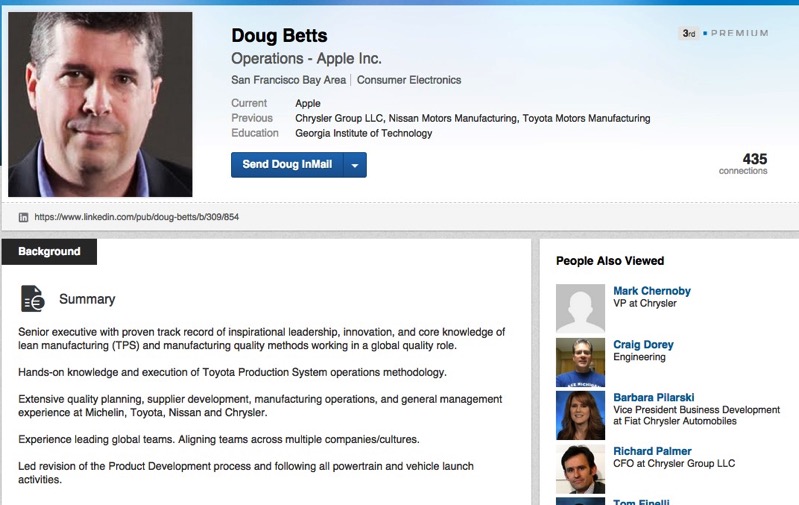 Betts’ resume notes he was the senior vice president of Chrysler Group LLC up until November 2014, a role he held for over 7 years. Prior to that he was the senior VP at Nissan and before that, a general manager at Toyota overlooking the manufacturing division.

Back in February of this year, the WSJ reported Apple’s secret ‘Project Titan’ consists of hundreds of employees working on an electric vehicle. Apple has previously hired an executive from Mercedes-Benz, while other publications have stated the company was said to create a vehicle that would give Tesla a “run for its money.” Apple has close to $200 billion in cash so the sky’s the limit to what it could create as its next big thing.

Should we start saving up for ‘Apple Car’ already?