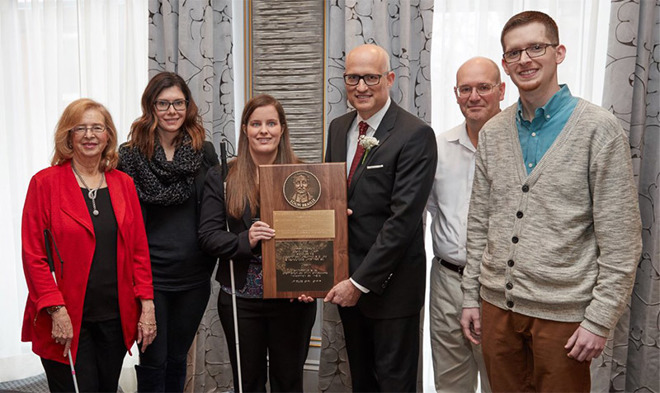 Apple has been honored with the prestigious Louis Braille award for efforts made to build accessibility functions into all their products, including the iPhone, iPad, Apple Watch, and Mac. Apple engineer Jordyn Castor who has been blind since birth was among the members who received the award on behalf of the company.

According to Apple, the braille is supported across both iOS and Mac devices with braille tables for more than 25 languages and 70 models of refreshable braille displays. Apple CEO Tim Cook has congratulated the accessibility team through a Twitter post today.

Since 1959, Associated Services for the Blind and Visually Impaired (ASB) has annually bestowed the prestigious Louis Braille Award to honor individuals and organizations that have made significant contributions on behalf of individuals who are blind or visually impaired.

The website notes the contributions made by the Apple in the ASB official website. In the past, Apple has also received American Foundation for the Blind’s Helen Keller Achievement Award for creating and implementing voice over screen technology across its computing platforms.