Last week, Apple CEO Tim Cook had noted that Apple will make changes to further secure customer iCloud accounts, in an interview regarding compromised celebrity iCloud accounts and today, the company seems to have started sending alert emails to users when their iCloud accounts are accessed via web browsers, MacRumors reports (via Letem sv?tem Applem). 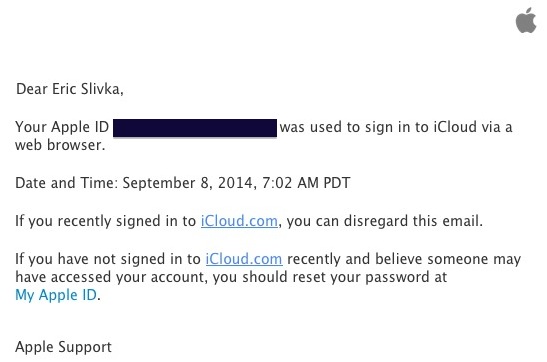 As you can see above, an email has been sent to the user upon accessing iCloud via a web browser on a computer. The source highlights that these alerts are sent out even if the specific browser has been used previously to access iCloud, though this may be a one-time measure and may not be repeated for future logins on the same computer/browser.

In addition to the above alert, Tim Cook mentioned Apple will also be sending push alerts and email notifications when someone tries to change your account password or when someone attempts to restore iCloud data to a new device. We hope these changes will be rolling out pretty soon too.

Google's Android Security Team has discovered that several Android OEMs, most notably Samsung, LG, and MediaTek, have had their cryptographic app-signing keys leaked (via Ars Technica). Cryptographic signing keys are an integral pillar of Android security. When your phone updates an app, it checks to make sure that the signing key of the already installed app...
Nehal Malik
17 mins ago