Apple II Gets OS Update On its 30th Anniversary 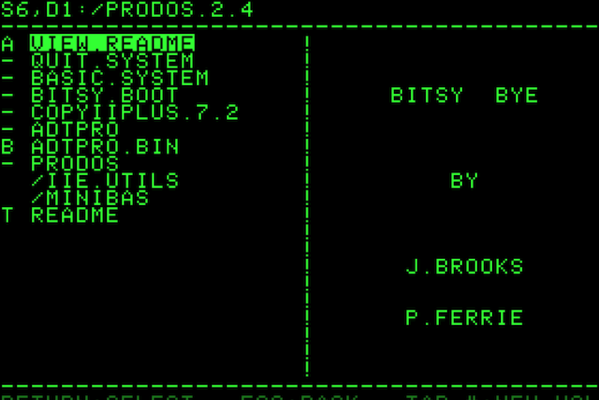 On the 30th anniversary of the introduction of the Apple II GS, devoted developer John Brooks has released ProDOS 2.4, bringing the enhanced operating system to the old Apple II systems, including the original Apple ][ and ][+ (via ArsTechnica). The Apple II computer family has received an OS update after 23 years, which is pretty remarkable considering the Apple ][ and ][+ don’t even support lower-case characters.

Ars is looking forward to booting up the physical Apple ][+ in our computer museum with the latest update, as soon as we straighten out the serial card and can write the disk image to floppy. But for now, we’re giving ProDOS 2.4 a spin on Virtual ][, an Apple II emulator, using our (licensed) Apple ][+ ROM image.

The ProDOS 2.4 can be test-driven in a web-based emulator set up by computer historian Jason Scott on the Internet Archive. The release includes Bitsy Bye, a menu-driven program launcher that allows for navigation through files on multiple floppy or hacked USB drives.

The ProDOS 2.4 also “floppy” includes a collection of utilities, including a MiniBas tiny BASIC interpreter, disk imaging programs to move files from physical floppies to USB and other disk storage, file utilities, and the “Unshrink” expander for uncompressing files.