The U.S. Patent and Trademark Office has granted Apple a new patent titled “Device orientation based docking functions”, that describes a method in which an iPhone or an iPad can change docking behaviour based on its orientation while laying on an inductive charging pad. According to AppleInsider, the “smart dock” would feature a processor, various input / output interfaces and integrated power supply. 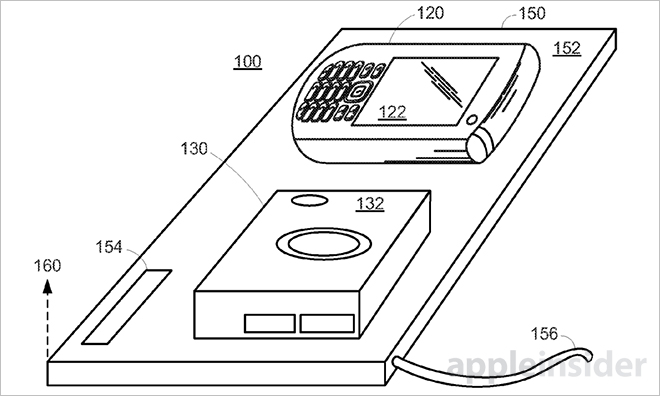 The filing suggests Apple’s smart dock may feature sensors to determine the physical orientation of a charging device and where it is positioned on the pad. Examples of different orientations include rotational position, determination of whether the device face-up or face-down, relative position compared to another device and position in alignment with certain coordinates, among others.

Interestingly, the patent also mentions that the charging surface may be built into a host device such as a MacBook, an implementation which would be well suited for charging smaller electronics like iPhones or the “iWatch.”

“In one embodiment, a user places a device face-down — display side down — on the mat. In this case, the system would provide inductive charging to the device. Alternatively, when the device is face-up, both data syncing and charging may be performed. During transfer of data, or any other function, a status symbol can be displayed on the device screen to inform the user as to what operation is currently being performed. The orientation can thereby be confirmed or adjusted depending on a user’s preference.”

Earlier reports have claimed that Apple is actively working on an inductive charging method for its much rumoured smartwatch, though no hard evidence relating to the product has surfaced.