This past weekend marked the release of a new web-based jailbreak for iOS devices that offered users a free and extremely simple method to jailbreak their iDevices. Some will remember the website JailbreakMe.com from the 2007 days of iPhone.

Well, JailbreakMe.com was released again this weekend for iOS 3.2 and higher devices.

The new jailbreak method does not require a computer or tethered iPhone at all and instead uses mobile Safari on the iDevice. The security risks of using Safari to jailbreak is extremely dangerous. If mobile Safari was hacked this easily, imagine what other malicious hackers could do!

The jailbreak, which exploits a security hole in mobile Safari, allows a remote site to gain control over a user’s device. In the case of the new JailbreakMe website, the exploit is offering a convenient jailbreaking delivery for users.

Late last night, Reuters reported that it has received an official response from Apple on the Safari exploit, noting that Apple is aware and investigating the problem.

Apple spokeswoman Natalie Harrison said the company was aware of the report and is investigating.

The report does not indicate any time line for the fix, but be sure that Apple will have a 4.0.2 fix out soon for iPhone and iPod touch and a 3.2.2 fix for iPad. 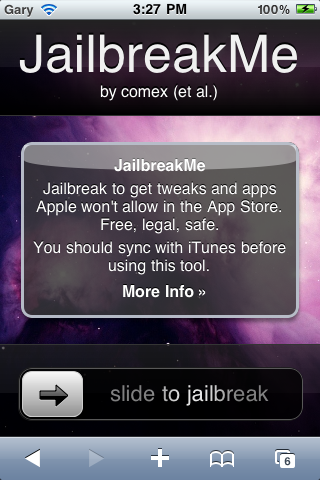