Last week, Apple was granted a historic patent related to its touch-based text selection tool titled “selection of text using gestures”, which was filed back in March 2008. Today, Bas Ording, a user interface designer and one of the inventors of the iOS text selection patent, has shared the story behind the development process of Apple’s patent with CultofMac. Ording also has main contributions in the development of iPhone’s pre-iOS 7 virtual keyboard and some of iPhone’s scrolling features. 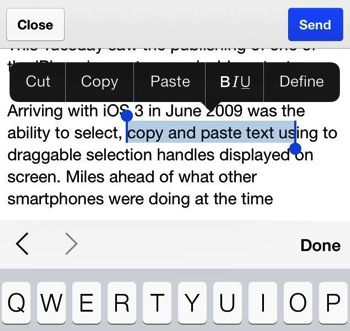 The designer recalls that when iOS 3 was released, everyone knew that text selection had to be included as a feature. “The only question was how best to implement it”, he said. Apple’s MessagePad devices had translated cut-and-paste to a mobile device by using a stylus, but Steve Jobs was against it as an option for the iPhone. “That was strictly a no-go area,” Ording says. “I remember Steve telling us that if you needed a stylus to use the iPhone he wouldn’t ship it. The idea was always to use your finger instead of other tools.”

“The idea that we struck upon was having handles at the beginning and end of the text selection that the user would be able to move around,” Ording continues. “Some people called them ‘lollypop sticks’ and we played around with a bunch of different ideas [regarding] how best to do them. It started out with much larger visible handles. We ended up making them smaller and smaller, until they were just dots. You see, it turns out your fingers are actually pretty precise. If there’s a grain of sand on your desk, you can easily target it despite it being a tiny dot.

Ording notes that Steve’s push for perfection was as much on display in the iPhone’s text selection tools as anywhere else.