When Steve Jobs revealed the iPhone 4 to the world–we had already seen its industrial design thanks to a certain tech blog buying a stolen prototype. From that day onwards, the world again went iPhone-crazy.

In Canada, we’ve always had our iPhone-lust at an all-time high. There are many out there including myself that bought the first iPhone from the USA and brought it back home to jailbreak/activate. Those were the good ol’ days.

Canada’s iPhone 4 launch was unfortunately delayed to the second batch of countries, which Apple announced for the iPhone to arrive on July 30th. We waited in line for the iPhone 4 and it definitely paid off (except for people waiting for Rogers activations!). People are still waiting in line today for the phone a month later!

Review: Using the iPhone 4 for a Month

It’s been a month since I got my hands on the iPhone 4. After using the phone for a month, I’m going to compare it to my old 3GS (which my wife was happy to take off my hands!). I’ll explain my experiences with the phone and in particular the new features and form factor. I am not going to waste your time reviewing the features and write 5000 words for the sake of writing 5000 words. Here we go!

When I got my iPhone 4, I had the Apple Store activate it for me so I could start playing with it right away. When the employee made that first cut into the plastic wrap, I told them I wanted to unwrap the phone. They happily obliged of course and I unboxed the phone right inside the store.

My first impression of the phone was how much heavier it felt. Although it’s only two grams heavier than the iPhone 3GS (137g vs 135g), the iPhone 4 feels much “meatier” in your hands. The stainless steel band gives the phone a much more industrial feel and look. The iPhone 4 is also thinner than the 3GS (9.3mm vs 12.3mm).

People who hold the iPhone 4 for the first time always comment that it feels “thicker”–this is only because the 3GS body was tapered and rounded on the edges. I still hold up the iPhone 4 and marvel at how thin the body is. It almost reminds me of the “candybar” cellphone days, albeit larger and thinner. 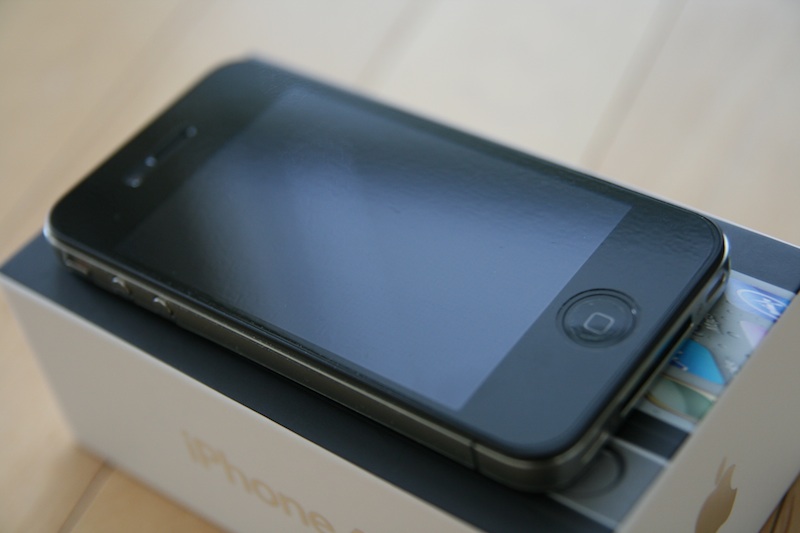 iPhone 4 with the ZAGG invisibleSHIELD 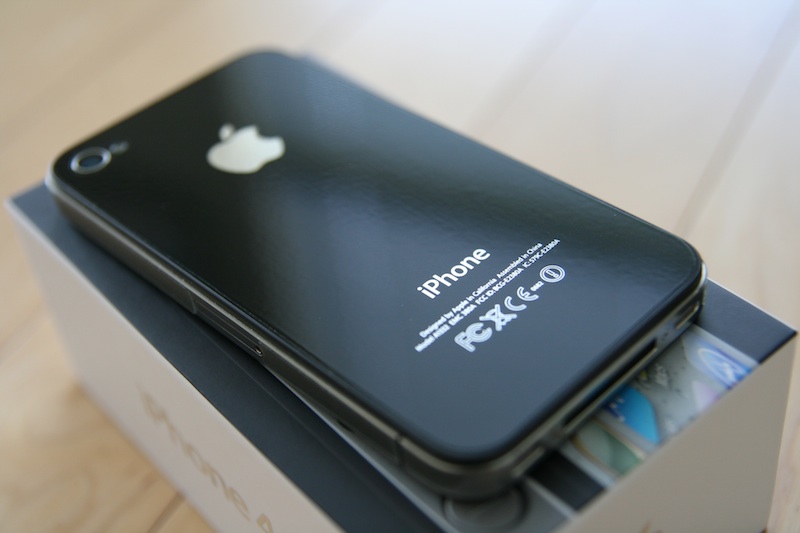 iPhone 4 with the ZAGG invisibleSHIELD (Back)

The Retina Display–It’s Clearer Than You Think

Now this is what I believe is the best feature of the iPhone 4–the amazing display. Coming from the iPhone 3GS, the iPhone 4 screen trumps anything I’ve ever seen. The clarity of text is so outstanding that it’s hard to go back to anything else. Because of this, I find myself surfing the web and checking email more on my iPhone 4 now instead of my iPad. Images, video, and text is crystal clear. People always comment “wow, the screen is so clear!” when they check out my iPhone 4. It really is almost like ‘looking at paper’ on your phone. 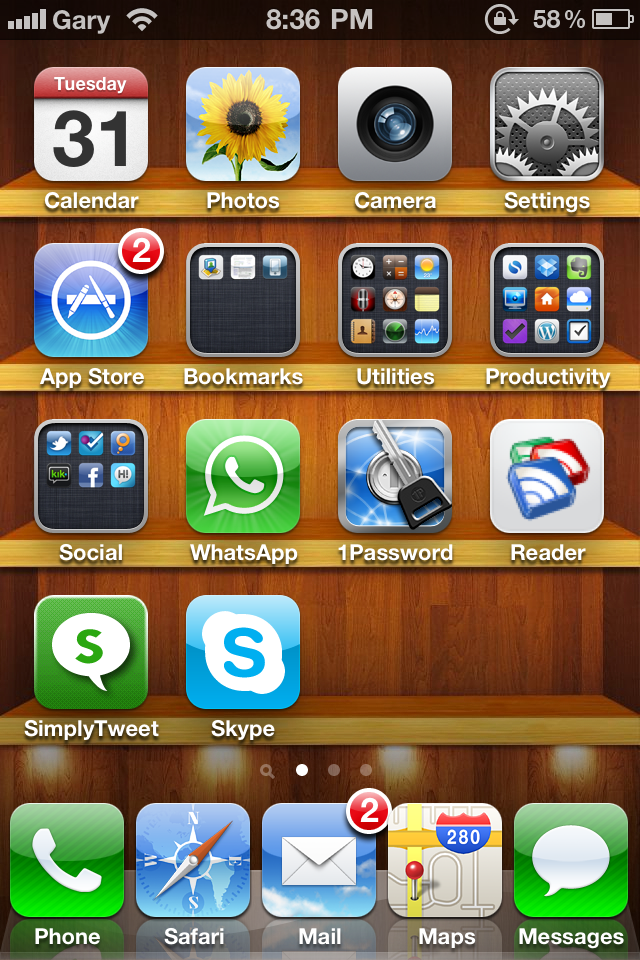 My iPhone 4 homescreen in all its glory.

720p high definition videos look amazing–the only problem is trying to hold the iPhone body still during filming. Double tapping the screen in video mode will allow you to shoot in widescreen format. What I loved about filming videos was using the iMovie iPhone app to film movies on the fly. Never before could you put together a mini masterpiece with such ease. iMovie is limited in its features, but there’s enough in there to document your weekend getaway or birthday party.

Here’s a 720p video filmed and edited with iMovie, and uploaded to YouTube via PixelPipe (make sure 720p is selected on your computer):

The front facing VGA camera is good enough for self portraits–but the picture quality is disappointing. I expect Apple to upgrade this in the future.

The LED flash is a nice touch (it took a long time for this one to arrive) and it’s useful when you’re in extreme low light situations that warrant flash. It does the job well and does not overexpose shots. Also, when coupled with a flashlight app, it’s extremely bright at night.

The 5MP camera is also excellent. The new backside illumination sensor has allowed me to capture lowlight images with such ease–not even my point and shoot can keep up! The clarity of images taken with this tiny lens is remarkable. The images below speak for themselves: 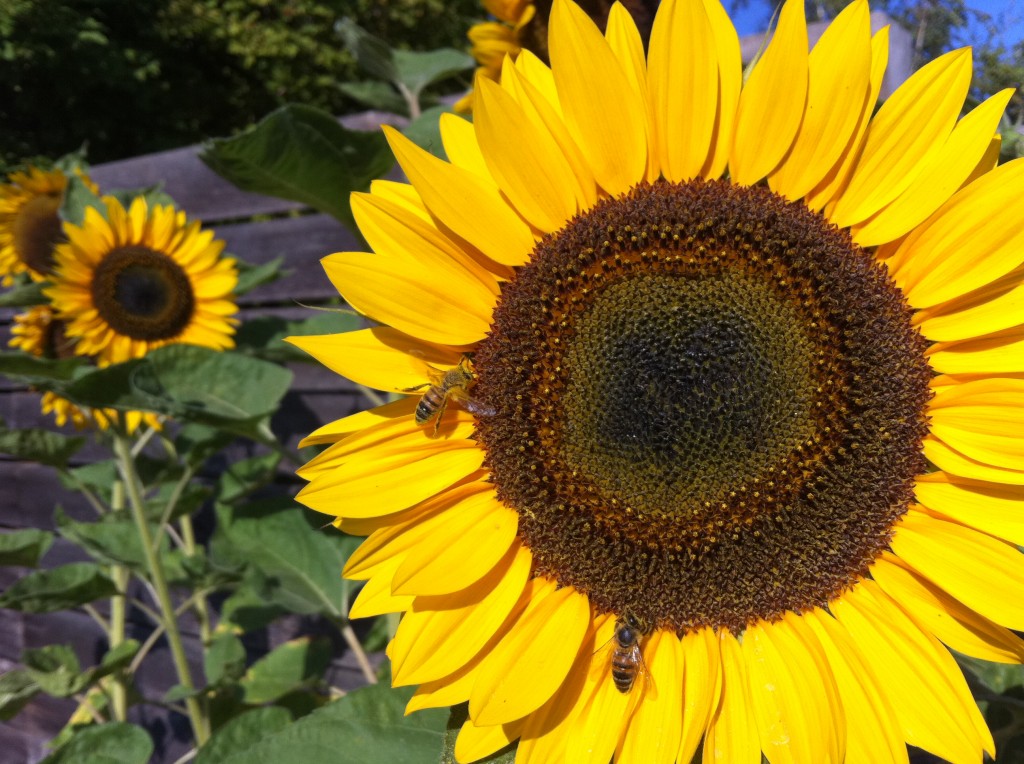 The "focus" tap was on the bee. 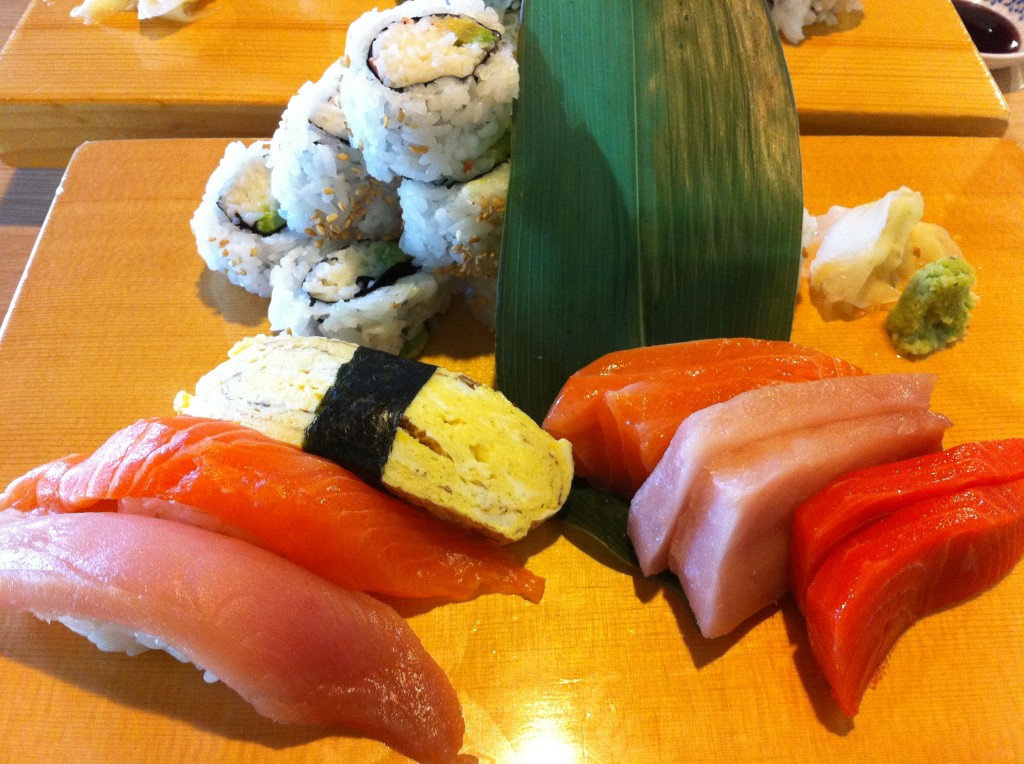 Out for sushi dinner with my wife. Hitoe Sushi on West 4th. 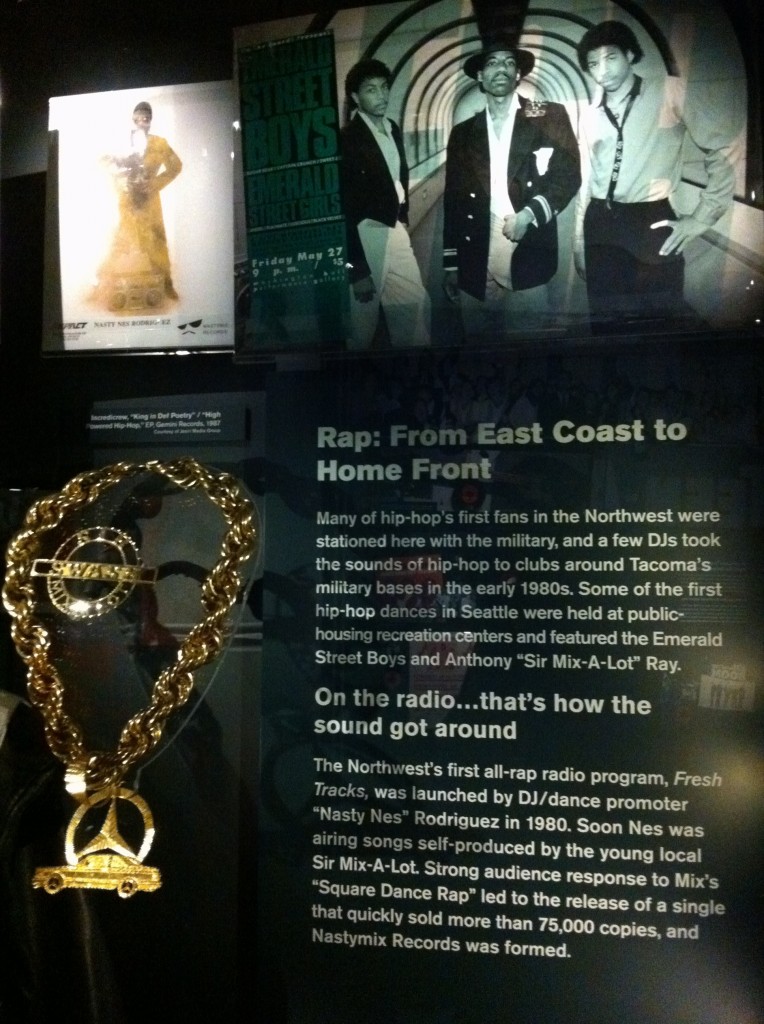 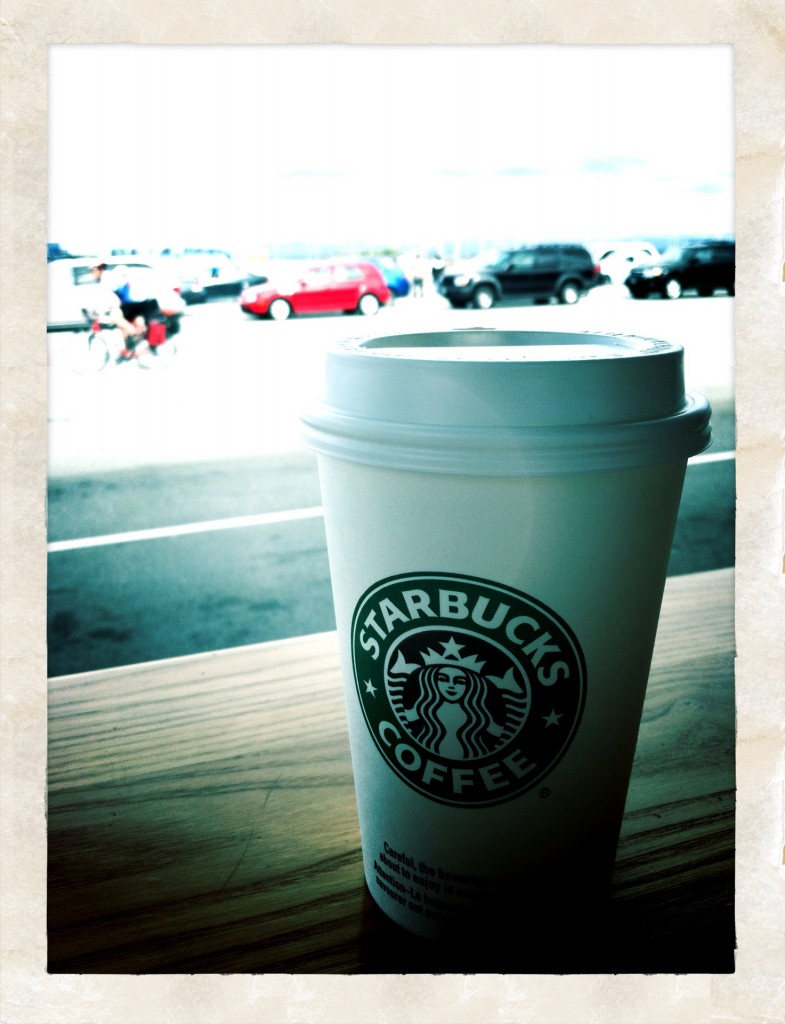 The A4 Chip Hard at Work

The iPhone 4 houses the same in-house designed chip as the iPad. You notice this immediately as switching between applications, and loading of webpages is lightning fast. I did notice that power hungry apps such as iMovie did result in lag at times though. Either way, playing graphic intensive games such as Let’s Golf 2 is a joy as gameplay is buttery smooth.

One of the biggest weaknesses of the iPhone 3G/3GS was the absolutely abysmal battery life (3G kills your battery). I was barely able to last a full day with moderate usage and always had to carry around some battery packs (such as the Richard Solo 1800). The improved battery life of the iPhone 4 is noticeable immediately. Once I take my iPhone off the charger in the morning, standby barely dents the battery at all. I will most likely see 100% or 99% after an hour or so of standby.

The best part is with moderate web surfing, tweeting, listening to music, snapping pictures, etc.–the iPhone 4 will last you a full day and more. Apple’s decision to move the antennas to the exterior of the phone to make room for a bigger battery was a good one (well, minus the antenna issues experience by some!). This new battery leaves you feeling confident that your phone will last you an entire work day and more.

To start a video chat on your iPhone 4 with FaceTime is dead easy. One tap is all it takes to call people–and it’s a free voice call if you initiate it via your contacts. When I first tested this feature I was absolutely amazed at how simple it was. However, now that I’m a month in the novelty of this feature has worn off a bit. It’s only useful if you know enough people with iPhone 4s and you’re in an environment that warrants a video call. How often do you use FaceTime? What about FaceTime over 3G?

Should You Buy the iPhone 4?

Overall, I am extremely happy with the iPhone 4. The build quality is excellent, the camera is much improved, and most of all the battery actually lasts a day. Coupled with iOS 4.0, the iPhone 4 rocks with the beautiful Retina Display. Even though the battery has been improved–I still think it could be better.

If the iPhone 4 has been your first iPhone, congratulations for waiting this long, as this fourth generation is definitely the smartphone to beat. Given that people are still waiting in line to get this device (due to massive demand and supply shortages) a month after the launch, that should indicate just how many people want this phone.

How do you like your iPhone 4? Or are you still waiting to get one?!