In a surprising move yesterday, Apple announced a revised forecast of its upcoming holiday quarter earnings, noting a decrease of up to $9 billion USD in revenue, citing issues in Greater China and also lower than expected iPhone upgrades. 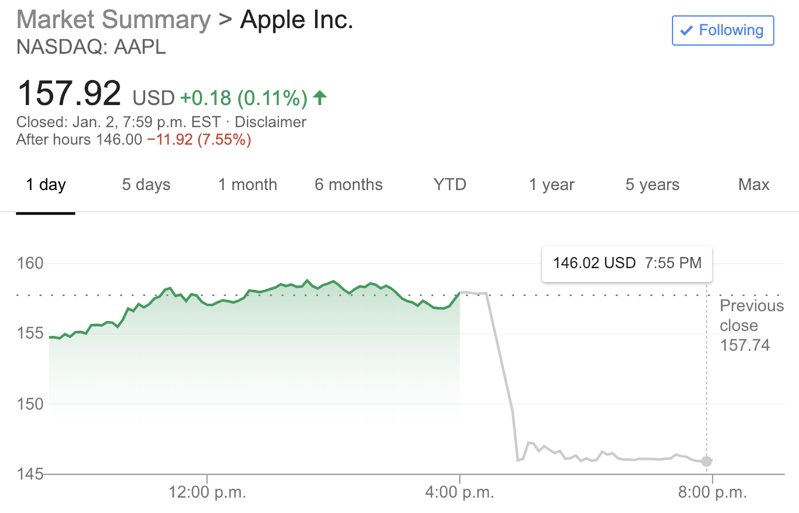 Apple is set to hold an all-hands meeting today at its Cupertino headquarters (9:30 AM PT), as announced to staff in a memo sent out yesterday by CEO Tim Cook, reports Bloomberg’s Mark Gurman.

In the company memo, Cook says despite the disappointment with iPhone sales, “our fiscal first quarter was also a record setter for revenue from Services, Wearables and the Mac,” while “iPad revenue grew double-digits over the year-ago quarter.”

The memo also details “iPhone activations in the U.S. and Canada set new Christmas Day records,” showing some love for the Canadian market. Cook also goes on to write “We expect to set all-time revenue records in key markets including the US, Canada and Mexico, Western European countries including Germany and Italy, and countries across the Asia-Pacific region like Korea and Vietnam.”

The rare miss by Apple had the company’s shares down 7.55% in after-hours trading, following the announcement.

Tim Cook also gave an interview to CNBC explaining the company’s shortfall in Greater China, which you can watch below. He seems a bit rattled in the interview:

There are many reasons why people aren’t upgrading their iPhones as often, with price being a major factor. Apple increased their prices on pretty much all of their products in Canada in 2018, while the allure of new iPhone models are not as great as before, given a mature market with most having ‘iPhone fatigue’ by now. We need more ‘wow’ features from Apple aside from just better cameras, larger displays and higher prices (and bent iPad Pros and missed product launches like AirPower).

Om Malik says it’s not just Apple being affected by the trade war with China–it’s every other luxury and fashion brand too, but Apple is taking the news head-on:

The trade war — which has gone from being a tweet to a tornado that has ripped the roof off one of Silicon Valley’s stalwarts. Trade wars obviously have a consequence, and Apple is suffering like every other luxury and fashion brand that has been too reliant on the Chinese consumer. Like Apple, they too have been puking on the side of the proverbial Wall Street. Tiffany, for instance, is down almost 14 percent over the past three months. Coach is performing even worse, almost as bad as LVMH, the company that owns Louis Vuitton, Loro Piana and a whole bunch of others.

Even with the iPhone sales miss, Apple is still expected to have revenue of $84 billion USD in its 2019 Q1, to go with $130 billion in cash. Those are still some solid numbers.