A new Apple patent published today by the U.S. Patent and Trademark Office (USPTO) shows a snap-on iPhone gaming accessory that extends in-game controls beyond the handset’s display. According to AppleInsider, the patent titled “Accessory for playing games with a portable electronic device” was filed by Apple six years ago, and describes a piece of gaming hardware designed exclusively for use with an iPhone or an iPod. 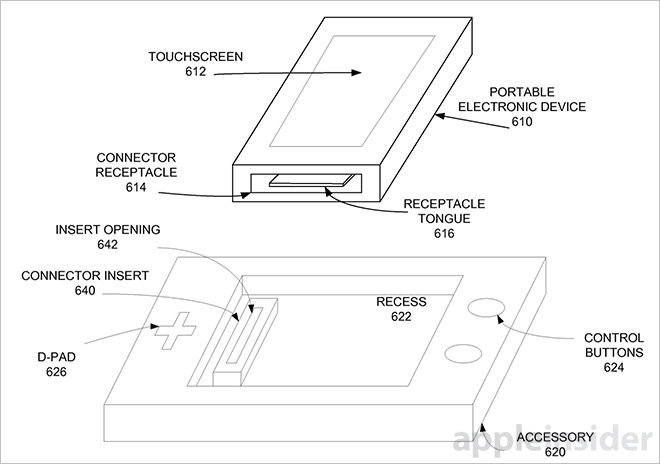 The patent filing notes that onscreen controls on the iPhone’s multitouch screen often disrupt a player’s view. To solve this issue, Apple details an add-on device with directional pads, joysticks, action buttons and more. When inserted into the gaming pad, the iPhone becomes part of a larger portable system complete with multiple D-pads, full-function action buttons, force feedback and more. The document also points out that the controller may not require a hardwired connection and can instead communicate with an iPhone wirelessly.

“All important controls are positioned around a central recess that serves as a dock for a user’s iPhone — positioned in either landscape or portrait orientation — which slides, snaps or otherwise locks itself in place. Certain embodiments hold conditions for extras like cameras, microphones, speakers and in one example, a Nintendo DS-like secondary multitouch display. Apple suggests a second handset can be used for the latter.

The patent also provides for wireless multiplayer gaming with other players using similar accessory hardware. Like many portable gaming consoles, Apple’s proposed setup would include point-to-point or ad-hoc connectivity established using Wi-Fi or Bluetooth, as well as capabilities for gaming online”.

Apple’s iPhone gaming accessory patent was first filed for in 2008,  just after the iPhone 3G was announced.