Apple: iTunes 11 Delayed Until November to “Get it Right” 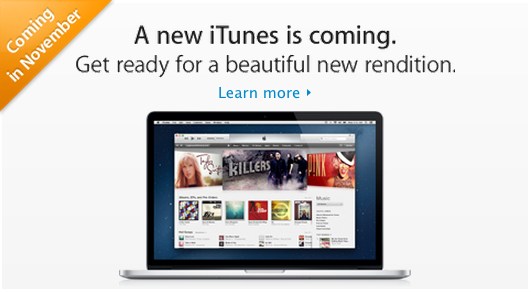 Apple has confirmed to The Loop it has delayed iTunes 11 until November:

“The new iTunes is taking longer than expected and we wanted to take a little extra time to get it right. We look forward to releasing this new version of iTunes with its dramatically simpler and cleaner interface, and seamless integration with iCloud before the end of November.”

A similar statement was provided to CNET.

Apple formerly announced iTunes 11 was set to debut in October. Time has almost run out but it’s good to hear Apple wants to wait and “get it right”. Below is a demo of iTunes 11 from its September special event:

Netflix has announced today they are rolling out the ability to great game handles, which are public usernames that can be used across the company’s slate of mobile games on iOS and Android. Supported games will have leaderboards such as Rival Pirates, Dominoes Café and Lucky Luna. How to create your Netflix game handle? It’s […]
Gary Ng
40 mins ago

Apple today started rolling out iOS 16.1 beta 3 for developers, with a public release of the build expected soon. YouTuber zollotech rounded up all of beta 3's changes in a recent video. iOS 16.1 beta 3 comes with a modem update that could resolve connectivity issues for users that were facing any, and other notable...
Nehal Malik
43 mins ago