A story published by The Loop reveals Apple’s iTunes U, a service that was launched in 2007, has already crossed 600 million downloads with over 300 million of them in the last year alone. For those who aren’t aware, iTunes U service is a part of Apple’s iTunes Store which was created to distribute educational audio and video content to students within a college or university as well as anyone over the internet. 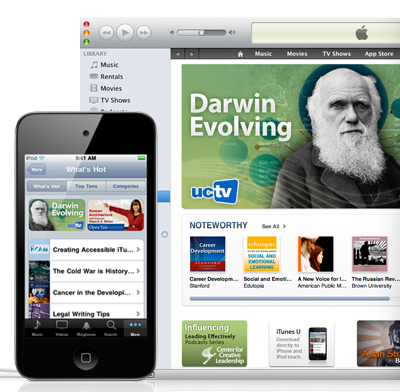 Each member institution is given its own iTunes U site that makes use of Apple’s iTunes Store infrastructure, all without any cost. Currently, over 1,000 universities are holding active iTunes U accounts including the most prestigious institutions like Harvard, MIT, Cambridge and Oxford. As the report reveals, some universities have a larger amount of downloads than the others with MIT and University of California having over  20 million downloads, while Open University and Stanford University each have over 30 million downloads.

Statistics reveal 60% of iTunes U users are from outside the U.S since the service is already available in more than 123 countries.