Apple sent out an August 2018 newsletter for their Apple Affiliate Program yesterday, which announced the company would be ending commissions for iOS and Mac apps, along with in-app purchases, starting October 1, 2018. 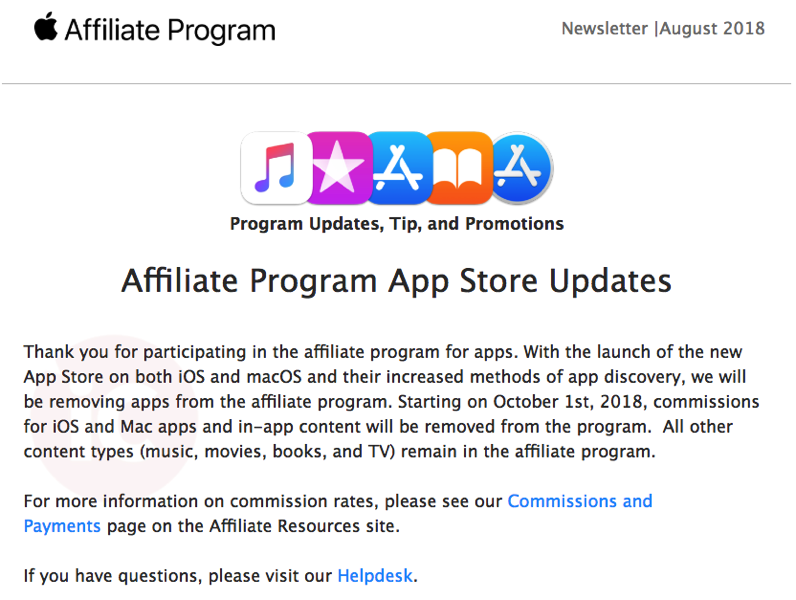 For more information on commission rates, please see our Commissions and Payments page on the Affiliate Resources site.

If you have questions, please visit our Helpdesk.

As stated, Apple says the program still remains for music, movie, book and TV purchases. The sudden end of the program for iOS and Mac apps comes as a crushing blow to small publishers who relied on these small, but important commissions as part of their revenue stream.

Reaction to the news quickly led to some swift reaction on Twitter:

Without notice, Apple just killed the App Store affiliate program- The only reliable revenue source for sites like TouchArcade, AppShopper, and others. This is unbelievably terrible news for all third party App Store editorial. https://t.co/nsCAapp3zj pic.twitter.com/2znXq8kanj

I am personally not that affected because we saw this coming years ago and we adapted – but it’s a huge blow to small publications, indie devs, and others who rely on this to earn commissions. Sad. pic.twitter.com/CDeJMxoyVb

I always thought it was profoundly short sighted of Google Play not to provide an affiliate program.

Very sad to see Apple go this way now too.

Any revenue they save would be better invested in continuing to grow attention through affiliates.

Over at iPhone in Canada, we never relied on these affiliate commissions from the App Store and Mac App Store. We really feel for publishers affected by this.

The folks over at MacWorld have compared Apple’s latest M2 Pro and M2 Max processors with every other Apple silicon found in the iPhone, iPad, and Mac lineup. "Understanding the performance differences between each chip will help with your buying decisions, especially when you’re deciding between iPhone 14 or MacBook models.” To find out how...
Usman Qureshi
1 min ago

Sometimes, Members of Parliament can work together, especially when it seemingly benefits voters (or when there’s public outrage). According to The Canadian Press, taxpayers will no longer have to pay for the home internet bills of their MPs. The Liberals and Conservatives both agreed to axe members from having taxpayers foot home internet as an […]
Gary Ng
27 mins ago

In celebration of Data Privacy Week, Uber Canada has announced new privacy features for the Uber and Uber Eats apps for consumers. Uber has added industry-first “View as a Driver” and “View as a Delivery Person” features to its apps, which let you select what your driver or delivery person can view. The features are...
Usman Qureshi
37 mins ago