Here’s a welcome addition to the series of iTunes-related enhancements we’ve been seeing lately from Apple i.e a ‘Complete My Season Pass’ for TV shows. Similar to the ‘Complete My Album’ feature for music, the pass allow users who have previously purchased individual tracks to upgrade to the full album at a discounted price. This is yet another decent roll out by Apple which will not only save a lot of money for those who frequently purchase TV Shows through iTunes but at the same time, might see an increase in sales for Apple. 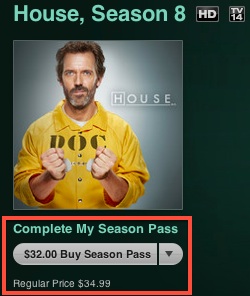 As noted by Mac Rumors:

When logged in and viewing an iTunes Store page listing for a single season of a TV show, the Season Pass purchase price will be reduced by the amount of previous single-episode purchases, allowing users to upgrade to the full season without having to essentially repurchase the episodes they had previously acquired individually.

iTunes season passes for TV shows already offer significant discounts as compared to buying each episode of the season individually. When a TV show Season Pass is purchases, users get access to an entire television show season with individual episodes automatically downloaded within 24 hours after they are aired.

Earlier this month Twitter’s ‘Chief Twit’ Elon Musk said encrypted direct messages were coming, and now we’re seeing evidence how the company will achieve this. According to researcher Jane Manchun Wong, she said on Saturday evening, “Twitter will adopt the Signal Protocol for Encrypted DMs. Seeing code references of the Signal Protocol inside Twitter’s iOS app.” […]
Gary Ng
55 mins ago