Citing latest data from S&P Global, Axios has pointed out that Apple has more than doubled its spend on stock buybacks from the previous quarter to once again become the leading S&P 500 company in buybacks with a record spend of $23.8 billion in Q1 2019. 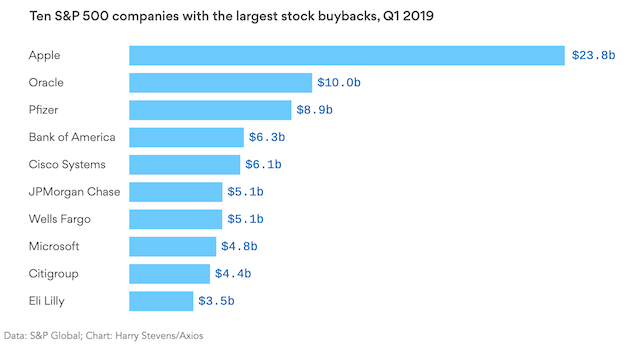 It is interesting to note that while Apple has increased its buyback spending, other companies on the S&P 500 have slowed from last year’s record pace. Having spent over $75 billion on buybacks over just the past year, Apple now holds 8 of the 10 all-time records for quarterly stock buybacks.

Ratings agency Moody’s warned last month that companies are spending more on share buybacks and dividends than they were paying in taxes before the 2017 tax cut. The tax savings “can be wiped out entirely by even a modest change in share buybacks,” Christina Padgett, senior vice president at Moody’s, told Axios at the time.

Companies bought back just $205.8 billion worth of their own shares, a 7.7% decline from Q4 2018, S&P reported. That ended the streak of 4 consecutive quarters of record buybacks.

Stock buybacks this quarter rose almost 9% from Q1 2018, which set a record at the time.