Apple introduced Live Photos with the launch of iPhone 6s and 6s Plus just over two months ago and it seems that the social networking giant Facebook is already pushing support for the new format. As pointed out by TechCrunch, Facebook is rolling out the ability to upload and view Live Photos from within their iOS app, starting with an update hitting today. However, Facebook is not pushing support out to everyone at once because Live Photos are still “fairly new”, claims the source.

Starting today, some Facebook users will start seeing Live Photos start popping up in their feeds, while the rest won’t see them until the new year. If the feature is enabled for you, all you need to do is that while uploading a photo from your camera roll that happens to be Live Photo-enabled, tap the “LIVE” box that appears in the bottom right and it’ll upload as a Live Photo. And if you don’t tap it, only the still photo will be uploaded.

Once in the feed, Live Photos will show as static images by default, just as photos always would. In the bottom right of each, however, will be a set of concentric circles — the same icon that Apple uses to indicate the “Live Photo” toggle within the camera UI (see the top-most right image for an example). Press and hold any photo with these circles, and the Live Photo starts playing. Lift your thumb, and it fades back to its static form.

It must be noted that even though only iPhone 6s and 6s Plus can capture Live Photos right now, any device running iOS 9 (iPhone 4S and above) will be able to view them on Facebook.

Update: we’re seeing this in Canada–check out our screenshot below. Again, the ‘Live’ icon doesn’t show in your Camera Roll, but after you select an image and tap ‘done’: 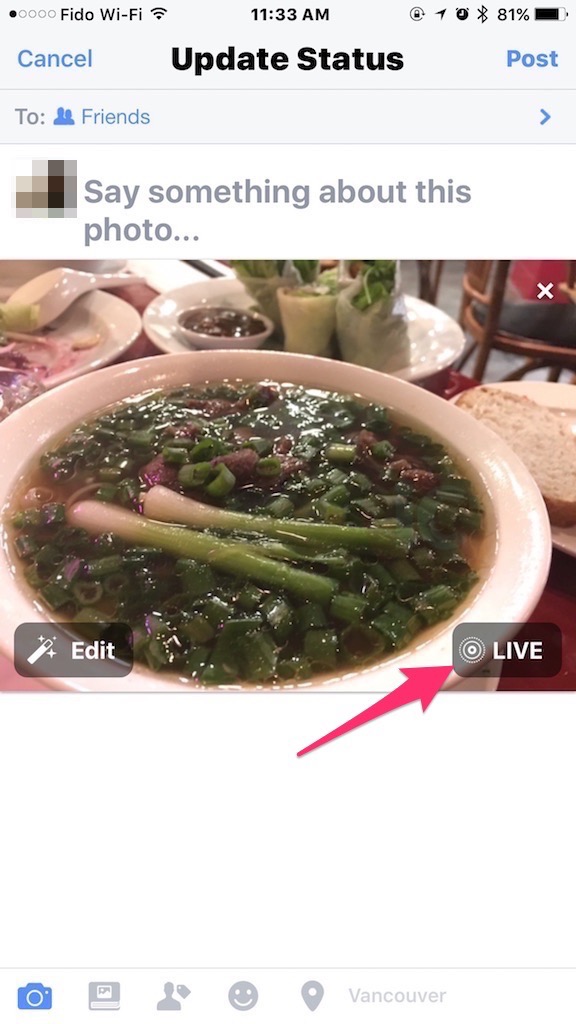 Are you seeing Live Photos on your Facebook news feed yet?