Today marks a big day for musicians using Apple products: A new app called Music Memos has been launched, alongside a notable update for GarageBand and performance update for Logic Pro X. Apple today shared a “secret” about Adele’s ultra-popular song “Hello”: Producer Greg Kurstin used his Apple gear and the Logic Pro X app to produce the song, as well as a few others, as shared in a new article posted today on Apple’s microsite dedicated to the software. 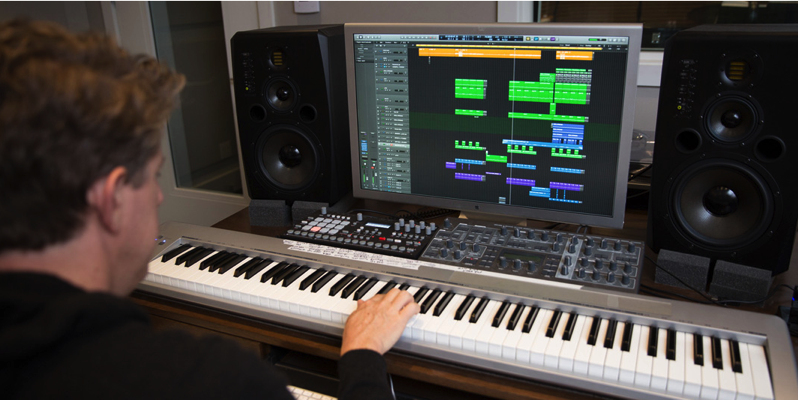 Kurstin has produced some top performers, such as Sia, Beck, Katy Perry, Foster the People, and many more, and more recently Adele. The key: his ability as an instrumentalist, deep understanding of music and song structure, and – looking at the technical part of the production process – using his mobile studio kit: a MacBook Pro, Apple’s Logic Pro X software, and third-party app Apogee Quartet.

As he details in the interview, his comfort with the technical side of producing came from a strictly musical urge:

“I was really into the music and the gear and playing,” he says. “I’m a musician at heart. And that’s all I cared about. I just wanted to get the idea down. Get an audio signal onto the tape. So at first I didn’t really pay attention to technology.”

After an audio engineer showed him Logic Pro, everything changed:

“Learning how to use Logic was a big breakthrough,” he says. “For the first time, I was independent of having people recording for me.”

The post also gives an inside look at the production process of Adele’s “Hello”:

In the studio, Kurstin and Adele kept it simple. “Most of the time, it was just jamming in the room really, with me at a piano,” says Kurstin. “We were simply playing with ideas, looking for some chords and a vibe. It was more of an old?school approach.”

“Hello” came out of the same uncomplicated studio approach. But its path to becoming a ubiquitous hit was not a straight one. “I really didn’t expect that song at all,” says Kurstin. “I was in a daze, probably a little jet-lagged, trying out a bunch of ideas on the MIDI piano in the control room. Then we moved out to the grand piano in the live room, and I just started playing chords.”

The chords were promising, and Kurstin and Adele were able to write most of the song that day. But they couldn’t finish it. “We tried different choruses, but we didn’t quite nail it,” he says. “And I didn’t know if we ever would. I thought maybe this one was going to end up on the shelf.”