Despite being end-to-end encrypted, your Messages leave behind a log that contains sensitive information such as the phone number you are communicating with and IP address. When so compelled by a court order, Apple shares this data with law enforcement, The Intercept reports.

The catch is in how Apple’s messaging system works: Every time you send a message, the app contacts Apple servers and checks whether it needs to route the message over the SMS system or the company’s proprietary messaging network.

According to the documents shared with The Intercept, Apple logs every such query. While this may not sound alarming, here is the thing: This log contains the date and time when you start your conversation with that number, and your IP address. This kind of information is handed over to law enforcement agencies when Apple is presented with a court order.

The iPhone maker says it keeps these logs for 30 days only, but the report states that this can be extended with the help of a court order, meaning that the police can get multiple months’ logs from Apple, if needed.

Apple is compelled to turn over such information via court orders for systems known as “pen registers” or “trap and trace devices,” orders that are not particularly onerous to obtain, requiring only that government lawyers represent they are “likely” to obtain information whose “use is relevant to an ongoing criminal investigation.” Apple confirmed to The Intercept that it only retains these logs for a period of 30 days, though court orders of this kind can typically be extended in additional 30-day periods, meaning a series of monthlong log snapshots from Apple could be strung together by police to create a longer list of whose numbers someone has been entering.

The data comes from a document entitled “iMessage FAQ for Law Enforcement”, which was shared with the Florida Department of Law Enforcement’s Electronic Surveillance Support Team. 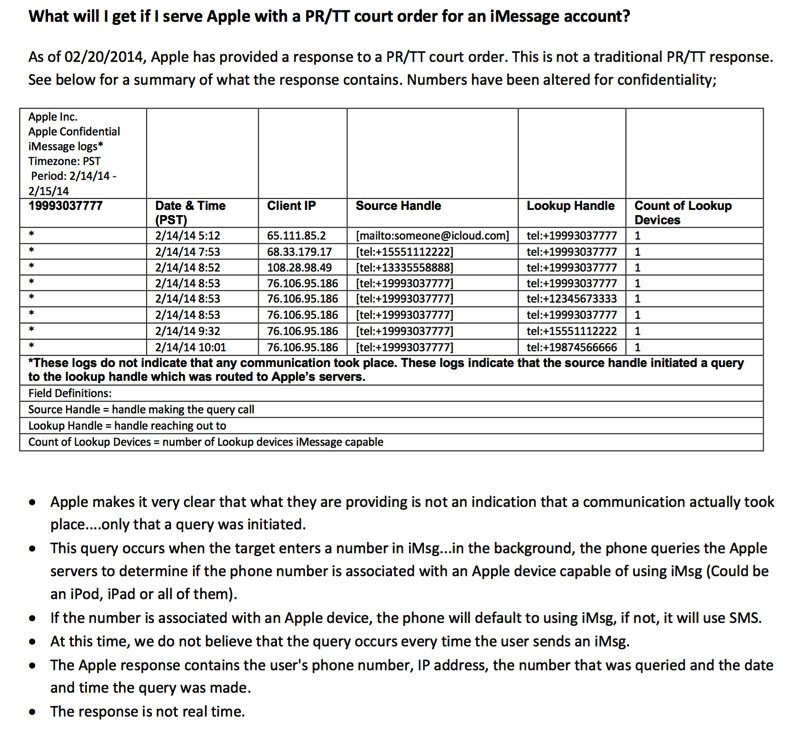 Apparently, every number entered into the Messages app is recorded by Apple, even if you don’t send the message to the recipient, for the aforementioned reason: to check whether you’re going to send an iMessage or an SMS.

You can read more about this on The Intercept.