According to a report by MacRumors (via ifoAppleStore), Apple is testing a redesigned Genius Bar for at least some of its retail stores in order to increase capacity at the busy support location. A photo of the new layout published by ifoAppleStore shows that the entire Genius Bar will be turned by 90 degrees to provide stools for customers on both sides of the table, a move that would sacrifice the kids’ tables typically found near the rear of Apple’s narrow store designs. The barrier between customers and support staff will also be removed with Geniuses and customers interacting on the same side of the table. 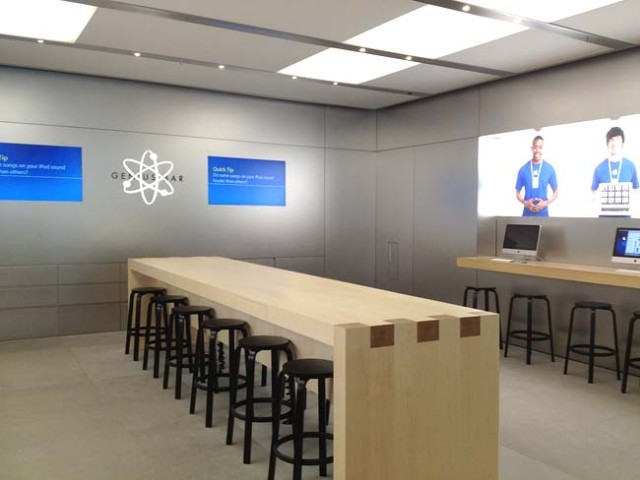 The source points out that as Apple has tweaked its support procedures so that Geniuses are assisting up to three customers at a time, the company can also more efficiently address customer needs with the new layout.

In reaction to an ever-increasing number of visitors to its Genius Bars and limited space to seat them, Apple is testing out a new configuration that increases Genius Bar capacity, and emphasizes the use of iPads to manage service records. The designers’ solution to Genius Bar crowds was to pivot the GB table by 90-degrees so that it’s perpendicular to the rear wall of the store, and to eliminate the iconic kids seats and tables

This new 90-degree Genius Bar turn solution would be particularly effective at narrow stores where there is limited room for seated customers. The improvement seems to come at the expense of the very popular kids area, with its round, black seats and iPads loaded with children’s software. It’s not clear if this design change will be rolled out to other stores or if it’s simply being tested at this specific store.

It is however not yet clear if this design change will be rolled out to all Apple stores or if it’s simply being tested at one specific store.

Any shred of mystery Google was saving for its Pixel 7 series launch event on Thursday, October 6, likely dissipated when a detailed and legit-looking spec sheet for the two phones leaked online over the weekend (via 9to5Google). Apparently, a mobile carrier in Taiwan prematurely shared the spec sheet for Google's Pixel 7 and Pixel...
Nehal Malik
35 mins ago