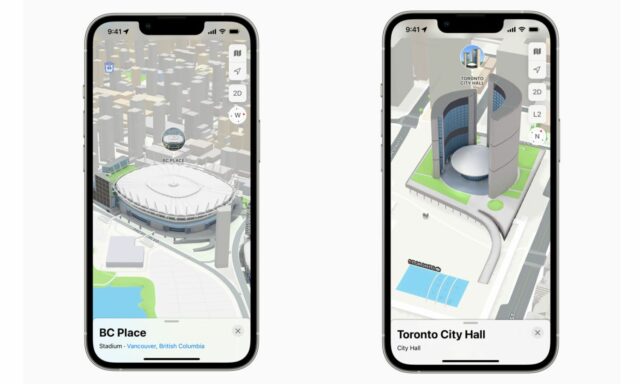 Apple has expanded its Maps enhancements to Canada. Starting in Toronto, Montreal, and Vancouver, the app now supports more accurate 3D renderings of buildings and navigation.

The iPhone maker announced that the latest Maps enhancements are now being supported in major cities in the Great White North. Users within the aforementioned metro cities will be able to see elevation details across a city, new road details, and custom-designed landmarks. Some examples Apple has previewed are Toronto City Hall and BC Place. The app also supports an enhanced night mode, which automatically kicks in as the sun sets.

“We’re excited for Apple Maps users to explore the beauty and culture of Montreal, Toronto, and Vancouver in an incredibly detailed new way,” said Eddy Cue, Apple’s senior vice president of Services. “Built with privacy at its core, this update is the continuation of our commitment to building the best, most accurate map of the world — with a beautifully designed experience and attention to detail that only Apple can deliver.”

With the new navigation implemented, users will be able to see turn lanes, medians, bus and taxi lanes, and crosswalks. These will also make navigating busy intersections easier as they are clearly defined and detailed.

For transit riders, the new Maps enhancements bring a slew of new features. Nearby stops are displayed at the top of the screen and users can pin desired ones within Maps. The app will then communicate when it is time to disembark as they reach their destination. Notifications can also be routed through Apple Watch.

iOS 15 introduced step-by-step walking guidance. Now, using Maps in Toronto, Montreal, and Vancouver, users can scan buildings in the area. Maps will then generate an accurate position for better directions that are contextualized for the real world.

Additional improvements include Look Around, a way to look around in an interactive 3D ground-level experience in a number of cities including Calgary, Halifax, Ottawa, and Toronto. Cycling directions have been added in the three major hubs of Canada. Favourites, speed cameras, and the ability to share ETA with friends and family are all available within the app as well.

These Maps enhancements were first promised by Apple last year. The company has slowly been rolling out the new features to a number of international cities, especially in the US.