You may recall the criticism Apple faced in 2012 with the launch of Apple Maps: remember the world-famous George Washington Bridge after it collapsed into the Hudson River (exclusive to Apple Maps app) and the like. 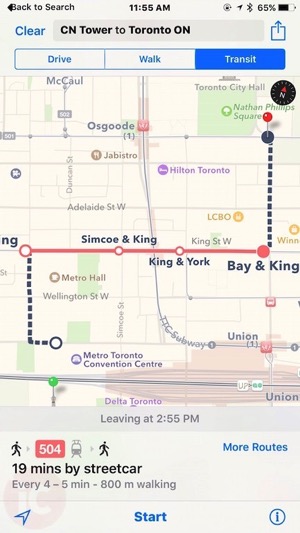 Fast forward to today and Apple Maps is now used more widely than Google Maps on iPhones, according to a report from the Associated Press. Why? Because Apple has put tremendous effort into fixing the errors all of us noticed and warned the company about. Also, it has quietly acquired several mapping companies for their talent.

Apple says its mapping service is now used more than three times as often as its next leading competitor on iPhones and iPads, with more than 5 billion map-related requests each week. Research firm comScore says Apple has a modest lead over Google on iPhones in the U.S., though comScore measures how many people use a service in a given month rather than how often.

Google Maps still dominates the US landscape (Apple Maps isn’t available on Android): Google has more than twice as many smartphone users as Apple Maps, as it is the default mapping app on Android.

“We are fast learners and we are fast at fixing things,” said Greg “Joz” Joswiak, an Apple vice president who oversees product marketing for iPhones and related services. “We learned the maps business incredibly fast.”

To deliver up-to-date information, Apple gets data from more than 3,000 sources for business listings, traffic, and other information. To add transit information, Apple has sent out teams to map out subway entrances and signs, possibly for more precise walking directions. Oh, and let’s not forget about those vehicles that have been mapping roads.