Justin O’Beirne, who is known for his contributions to Apple Maps as well as his blog, has compared the quality of Apple’s mapping data with that of Google’s in considerable detail, while explaining the competitive advantage Google has over Apple and everyone else, thanks to the amount of time the company has been collecting data for. 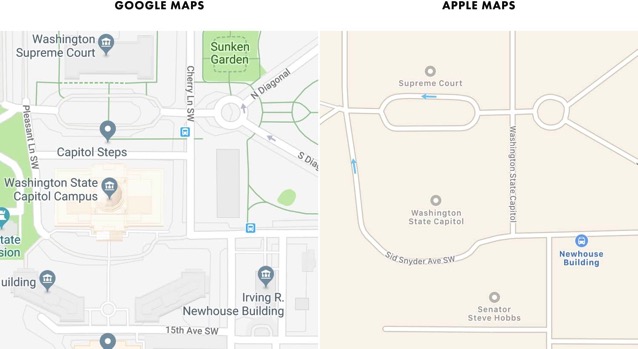 In 2005, Google debuted Maps and added the Street View feature to it in 2007. Apple Maps on the other hand, was first previewed at WWDC in June of 2012, and was released with iOS 6 in September of the same year. “Google has gathered so much data, in so many areas, that it’s now crunching it together and creating features that Apple can’t make—surrounding Google Maps with a moat of time”, writes O’Beirne.

The author highlights how Google creates this data using their satellite imagery, while Apple likely sources its data from a third-party like TomTom. He explains that by building a robust data library in-house, Google has been able to generate their own metadata, which gives them a significant competitive advantage:

With “Areas of Interest”, Google has a feature that Apple doesn’t have. But it’s unclear if Apple could add this feature to its map in the near future. The challenge for Apple is that AOIs aren’t collected—they’re created. And Apple appears to be missing the ingredients to create AOIs at the same quality, coverage, and scale as Google.

Apple, like Google, has also been collecting aerial imagery—and that it’s been doing this for at least the last five years. But unlike Google, Apple doesn’t appear to be extracting buildings out of its imagery. And in areas where Apple does have buildings, it appears that they’re being sourced from third-parties, such as TomTom.

You can read the super-lengthy article in its entirety at the source page.