Apple has maintained its top position in the US, grabbing 44.2% of smartphone market share, according to the latest data published by comScore. Google’s smartphone operating system, Android, remains the most popular OS in the market, the numbers reveal. 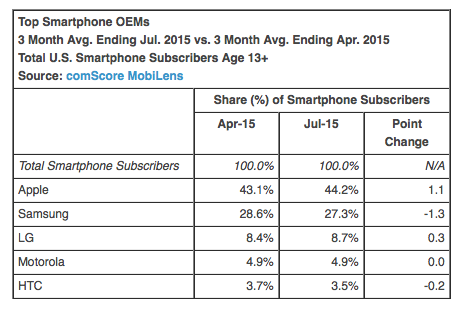 Smartphone penetration currently stands at 77.1% in the US, the market research firm says, which means that 191.4 million people in the country owned a smartphone during the three-month period ending in July.

When it comes to brand choices, Apple remains the most popular among US smartphone buyers, reports comScore, accounting for 44.2% of all sales, up 1.1% compared to the previous three-month period that ended in April. Samsung ranks second with 27.3% of market share, followed by LG with 8.7%, Motorola with 4.9%, and HTC with 3.5%. 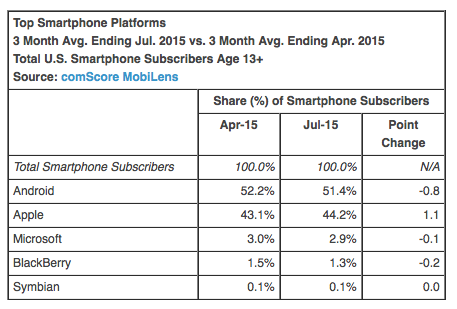 In terms of smartphone platforms, Android is the most popular with 51.4% of market share, followed by Apple’s aforementioned share. Microsoft ranks third with 2.9% — slightly down compared to the previous period — while BlackBerry continues to lose market share — currently accounting for only 1.3% of the overall US market, says comScore.

comScore also looked into the app market and found that Facebook and Facebook Messenger top the list of the 15 most popular smartphone apps. Google, on the other hand, controls the following four spots with YouTube, Google Search, Google Play, and Google Maps.