Despite declining iPhone sales – Apple sold 51.19 million units in the first calendar quarter of 2016 – the company still controls 15.3% of the global smartphone market, according to the latest preliminary release from the International Data Corporation (IDC) Worldwide Quarterly Mobile Phone Tracker. 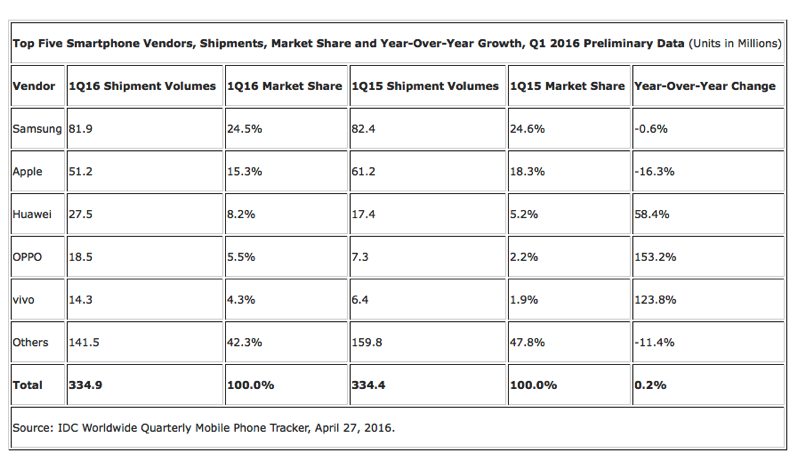 iPhone sales slipped 16.3% compared to the first quarter of 2015, worrying investors and pushing the Apple stock price down this morning by 8%. As IDC points out, the new features of the iPhone 6s/6s Plus weren’t convincing enough to make customers upgrade. (This message, however, has been repeated countless times since the launch of the handsets last fall.)

To compete with other OEMs in emerging markets, Apple has launched the lower-cost iPhone SE, which, at $399, still faces “equally powerful lower-priced devices from competitors, particularly in India and China,” IDC says. iPhone SE sales will have an impact on the company’s fiscal third-quarter earnings.

But it’s not just Apple, the world’s biggest smartphone vendor: Samsung has also recorded a slight (0.6%) decline in shipments, the market research firm says. However, the Galaxy S7 and S7 Edge sold well in March, and other lower-cost devices also performed well.

Overall, smartphone manufacturers shipped a total of 334.9 million units in the first calendar quarter of 2016, up slightly from the 334.3 million reported a year ago. The biggest surprises were the debuts of lesser-known Chinese brands OPPO and vivo in the top-five list, pushing out Lenovo and Xiaomi, respectively.