Following Apple’s quarterly earnings, it was IDC’s turn to release the latest preliminary results from its Worldwide Quarterly Mobile Phone Tracker. We know how iPhone sales performed during the September quarter – the company has set a new record – but how did others do?

Samsung continues to ship the most smartphones of all manufacturers, with 84.5 million units estimated by the IDC. That’s up 6.1% compared to last year. By comparison, iPhone sales grew 22.2% compared to the same period. Samsung’s “untraditional” August launch beat Apple to the punch for the Note series, says IDC, and, as a result, the South Korean manufacturer saw better than normal September shipments. Outside the flagship models, its sub-$200 devices drove the majority of shipments in many key emerging markets, the market research company highlights.

Following Apple (#2), Huawei shipped an impressive 26.5 million units, posting nearly 61% year-over-year growth and placing the manufacturer in third place in the IDC’s top five vendor list. In fourth place is Lenovo with 18.8 million units, and Xiaomi closes the list with 18.3 million units shipped in the third calendar quarter of 2015.

“The third quarter placed a substantial emphasis on flagship devices as vendors tried to outclass each other in both features and design,” said Anthony Scarsella, Research Manager, Mobile Phones. “New flagship models translated to fiercer competition at the high-end for most players as many will try to challenge both Samsung and Apple for a place among the elite. However, despite the glitz and glamour at the high-end, we still expect the bulk of volume and growth to once again sprout from low to mid-range handsets, particularly in emerging markets.”

Overall, vendors shipped an estimated 355.2 million units in the past three months worldwide, the IDC estimated. Apple’s 48 million iPhone unit sales secured 13.5% of the global market, up from last year’s 11.8%, while Samsung’s share stands at 23.8%. 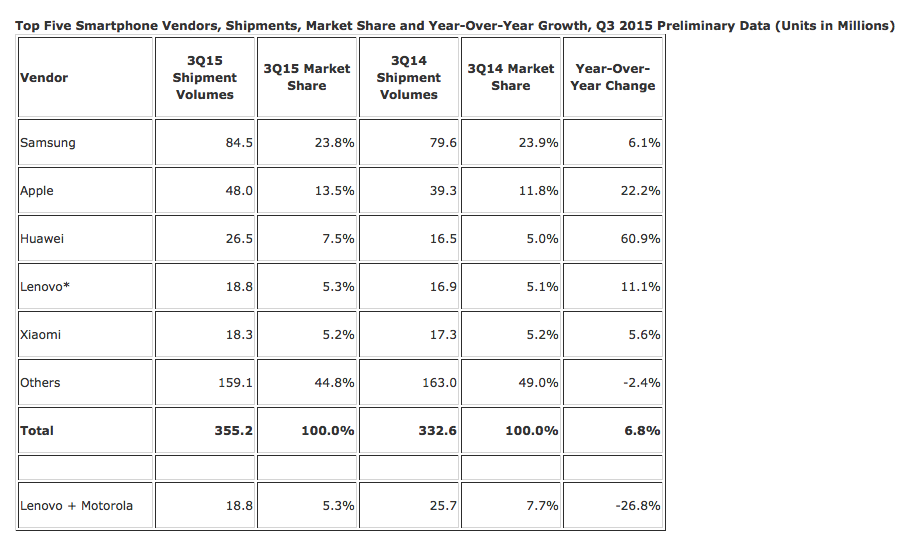