23% of U.S. Corporate Cash is Held by Apple, Microsoft and Google

According to a new report from Moody’s Investors Service, there is an unprecedented concentration of cash in the tech sector, revealing that Apple, Microsoft and Google are holding a combined $391 billion in cash, which is over 23% of the entire $1.68 trillion held by the nation’s non-financial corporations. Apple is on top of the list with $215.7 billion in cash, followed by Microsoft at $102.6 billion and Google at $73.1 billion (via GeekWire). 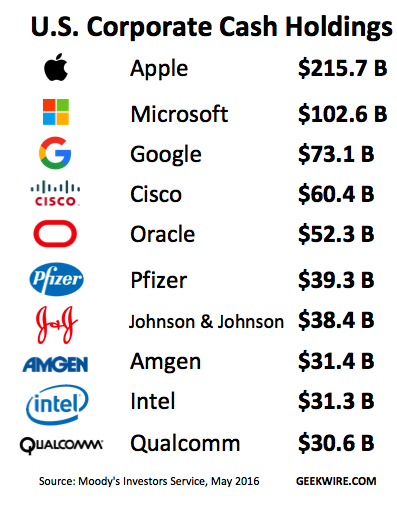 The report notes that for the first time, the top five companies on the Moody’s cash ranking are tech companies, with Cisco and Oracle following Apple, Microsoft and Google. Technology companies overall held $777 billion in cash, which is approximately 46% of the total cash across all non-financial industries.

“Despite stronger returns of capital to shareholders, we expect the technology sector cash concentration will grind higher over the next year because of the sector’s strong cash flow generation,” writes Moody’s in the report. “The technology sector generated 63% of the total rated non-financial free cash flow in 2015, up from 37% in 2007. Excluding the energy sector, tech comprised 40% of non-financial free cash flow in 2015, similar to the 42% average since 2007.”

Apple’s upcoming “M2 Max” chip was once again spotted on Geekbench's database on Thursday, this time indicating a more respectable jump in performance as compared to its predecessor, the M1 Max. Last week, the M2 Max chip showed up on Geekbench with a single-core score of 1,853 and a multi-core score of 13,855. The M1...
Nehal Malik
35 mins ago