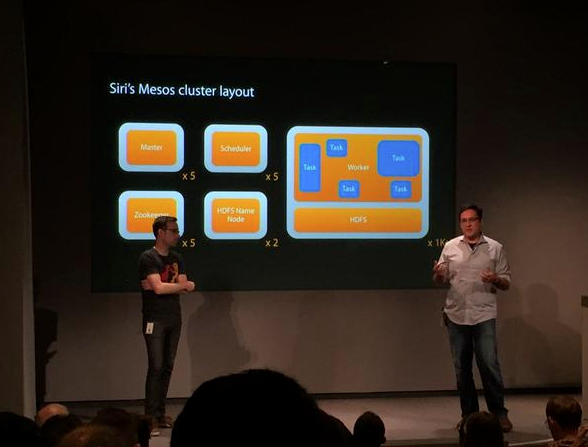 Apple’s popular virtual assistant has grown with the number of iPhone owners using it. Since its launch with the iPhone 4S, Siri’s voice recognition feature has become more powerful and faster. As it turns out, the Siri we know today is Apple’s third-generation system, the company revealed last Wednesday during a Bay Area Mesos meetup. (via MacStories)

Apple announced during a Wednesday night meet up at its Cupertino, California, headquarters that the company’s popular Siri application is powered by Apache Mesos.

We at Mesosphere are obviously thrilled about Apple’s public validation of the technology on which our Datacenter Operating System is based. If Apple trusts Mesos to underpin Siri — a complex application that handles Apple-only-knows-how-many voice queries per day from hundreds of millions of iPhone and iPad users — that says a lot about how mature Mesos is and how ready it is to make a big impact in companies of all stripes.

During the presentation, Apple engineers shared some high-level details about Siri’s backend: First, Apple is using a custom Mesos scheduler called J.A.R.V.I.S. (short for Just A Rather Very Intelligent Scheduler).

Apple’s Mesos cluster is one of the largest, as Siri’s backend comprises about 100 services spanning thousands of nodes.

By the way, Apple joins eBay and Twitter in moving away from traditional infrastructure to Mesos.