With Apple’s new video subscription service set to launch later this year, the company’s music streaming service is already on track for its best quarter yet. According to Sensor Tower Store Intelligence estimates, Apple Music has just surpassed the 40 million download mark on Android devices worldwide. 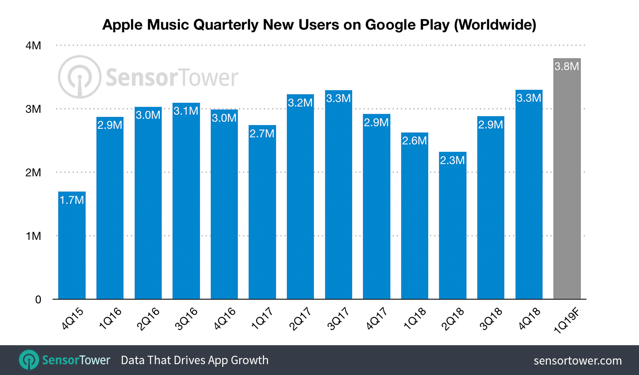 The source points out that Apple Music was the No. 25 ranked app for Google Play Music & Audio category downloads worldwide last month, up from No. 32 in February 2018.

Google Play users in the U.S. account for approximately 28% of all Apple Music for Android installs to date, with India coming in at second spot with about 7% of the total downloads. The U.K., Brazil, and Russia round out the app’s five largest markets on Google’s mobile platform.

Our estimates show that, following a steady quarter-over-quarter decline in new users for Apple Music on Android beginning in 4Q17 and continuing through 2Q18, the app has grown new users sequentially between 2Q18 and 4Q18, with 1Q19 on track to top all previous quarters. New users of the app in 4Q18 were up 43 percent over 1Q18.

Amazon today announced at its special event an update to its best-sounding Echo speaker, the Echo Studio. This speaker is now available in Glacier White, joining Charcoal, while it also gets some enhanced audio technology updates, that will be available for all existing and new users. New custom spatial audio processing technology and frequency range […]
Gary Ng
4 mins ago

Apple's new Crash Detection feature, available on iPhone 14 and the company's latest Apple Watch models, is designed to automatically contact emergency services in the event of a severe car crash.  However, it can sometimes mistake a rollercoaster ride for a car crash (via Reddit). One Reddit user found this out the hard way when...
Nehal Malik
21 mins ago

Amazon announced on Wednesday a new lineup of Fire TV Omni televisions, this time with QLED and also its “smartest TV lineup ever.” The new Fire TV Omni QLED Series is available in 65 and 75-inches, with 4K Quantum Dot Technology (QLED) displays and full-array local dimming for up to 96 zones. Dolby Vision IQ […]
Gary Ng
25 mins ago