Apple has today announced the launch of an official Apple Music app for Android smartphones, making it the company’s first user-centric app for Google’s mobile platform. “This is our first true user app…we’ll see what kind of feedback we get,” Apple’s SVP of Internet Software and Services, Eddy Cue said. “We’ve tried really hard to make a great app for Android. We’ll see what customers have to say” (via TechCrunch). Apple’s first Android app “Move to iOS” was released earlier this year for seamless switching from Android to iOS. 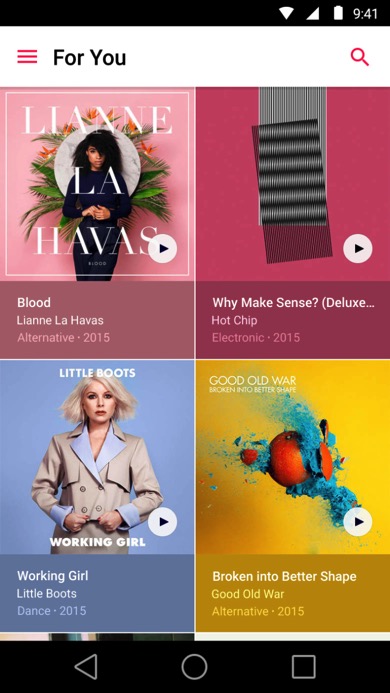 Apple Music for Android, which will initially be in beta, will be released today in all of the countries Apple has Music for iOS in, except for China. The app is quite similar to the iOS version, and comes complete with a 3-month free trial. The prices are same worldwide and the app requires Android 4.3 or later. It works with For You, New, Radio and Beats 1, Connect and My Music. Cue revealed that if a user has another device with Apple Music with his whole music library in the cloud, he can also access it from Android.

“It’s a full native app, so it will look and feel like an Android app. The menus will look like Android, you know the little hamburger they use on the top. It’ll definitely feel very much like an Android app,” says Cue. He makes the case that the best experience for an Android user would be to feel familiar with Apple Music right on launch. “We wanted customers on Android to naturally be able to use it — what they’ve learned and how they interact is common”.

Interestingly though, if a user pays for Apple Music subscription in the Android app, Google will get its traditional 30% cut of that fee.