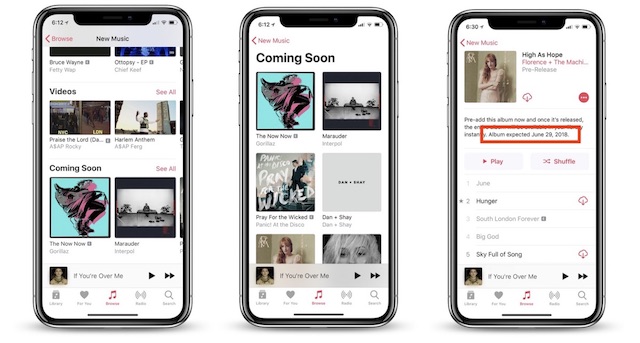 As pointed out by the folks over at MacRumors, a series of updates being rolled out for Apple Music today includes a brand new ‘Coming Soon’ section, that allows Apple Music subscribers to take a peek at new albums scheduled for release over the next few weeks.

Apple Music’s new Coming Soon section is accessible on both iOS and Mac, and is located in the Browse tab > New Music > Coming Soon > See All.  The source notes that before the introduction of the Coming Soon hub, the last thing to see here were the Music Videos. The hub lists artists from a variety of different genres, with impending albums from Panic! At The Disco, Florence + The Machine, Interpol, and more.

Mac users also have a drop-down menu for sorting, although it currently only has a “Recent Bestsellers” option. In future, Apple may allow sorting of upcoming albums by release dates, genres, and more. The sorting option is not yet available in iOS.

“In another addition, Apple is now making it possible to easily see album launch dates on their respective pages on iOS and macOS. In the Editors’ Notes section, following the traditional encouragement to add the pre-release album to your library, there’s a new line that begins “Album expected…” followed by the album’s specific release date.

Lastly, another rollout appears to be happening today in regards to artist profiles, showing up as of now only in iTunes on macOS. These profiles have a slightly tweaked layout with artist portraits in circular bubbles, and a “Featured Release” that includes release dates.”

The new Coming Soon tab on Apple Music has started rolling out for multiple users on iOS 11.4 and on macOS 10.13.4.