Apple has revamped its Apple Music beta preview website with an updated aesthetic and new “Listen Now” tab that replaces Music’s “For You” tab. 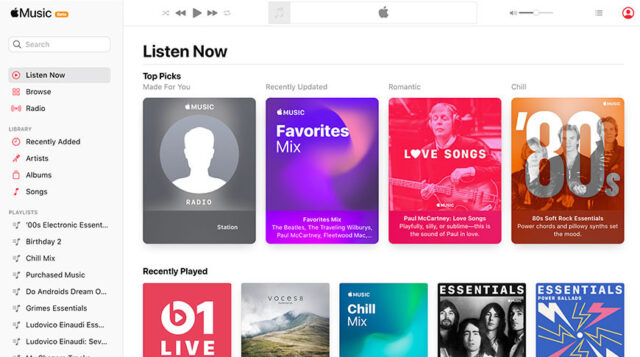 The Listen Now tab replaced the For You tab on other platforms in the iOS and macOS beta runs and it looks like it’s going to come to the web as well. That shouldn’t be a huge surprise to anyone, but it’s good to see it arrive in beta form ahead of a launch that will likely happen next month.

The Listen Now tab is where Apple Music subscribers can go to find new music and playlist suggestions based on what Apple thinks they’ll enjoy. Whether it succeeds in that goal is a matter for debate.

The overall look and feel of the Apple Music website has also been refreshed, more closely mimicking the updated iOS 14 and macOS 11 Big Sur look. It’s nice, and adds another layer of consistency across all of Apple’s music apps.

Unfortunately, the beta website still lack important functionality, such as the ability to edit playlist and song lyrics. Even so, the new Apple Music website is a nice alternative to access the service on other devices.

Like most web versions of music apps, Apple Music’s beta site is pretty limited, and it is likely designed to annoy you enough with its limitations for you to use the app. You can still access the older version of the website (not in beta) here.