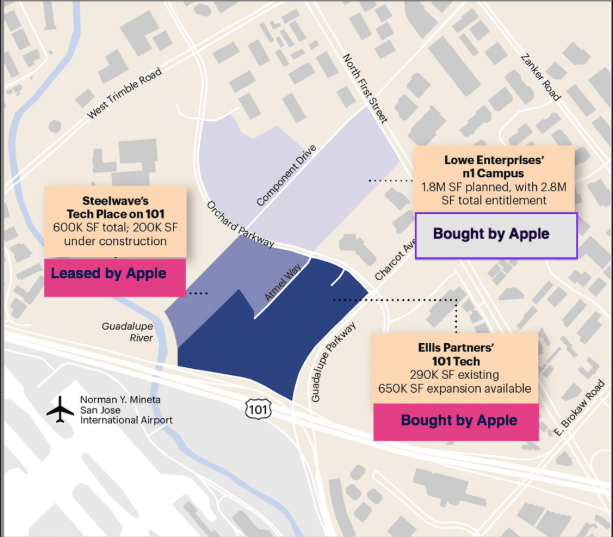 The Silicon Valley Business Journal reports that Apple is working with the city of San Jose on an agreement that would allow the company to build a massive campus measuring up to 4.15 million square feet. That’s way more than the Apple Campus 2 — currently under construction — which will be set in a 2.8 million-square-foot area.

The draft agreement, which is not yet completed, will come before the city’s Planning Commission later this month, officials said. It would lock in development rights — and expectations for both sides — for the next 15 years in an area that sprawls across 86 acres north of Highway 101 across from the Mineta San Jose International Airport.

As detailed in earlier reports, Apple has already leased or bought the majority of the land involved in the deal with the city: it has acquired 28 acres from Ellis Partners for $165.8 million; 43 acres from Lowe Enterprises for $138 million; and a 16.5-acre parcel currently owned by Steelwave, a real-estate developer, and also leased a 202,000-square-foot building (under construction) on the Steelwave site.

At this point, it is unclear what Apple’s plans are for the land, and the city documents revealing the agreement aren’t much of a help. However, the fact that Apple is clearly focused on that specific area suggests that it has big plans for those sites.