Market research firm IHS Markit has today claimed in a new report that Apple may adopt a new power-saving backplane technology for iPhone and Apple Watch displays in the long term for significantly improved battery life (via MacRumors). Apple is expected to switch to LTPO TFT, or low-temperature polycrystalline oxide, for the backplane on these devices. 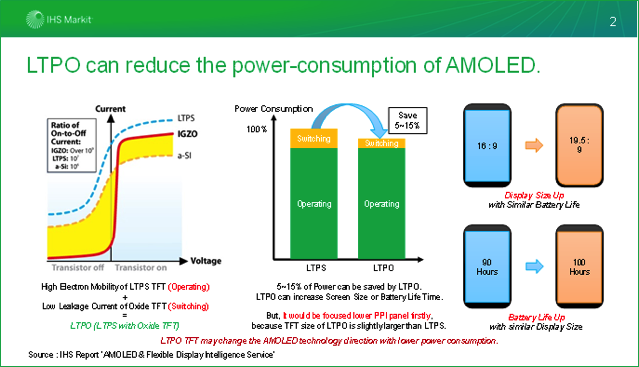 For those who aren’t familiar, the backplane is responsible for turning individual pixels on and off, playing an important role in determining a display’s resolution, refresh rate, and power consumption.

According to IHS, LTPO can save 5-15% in power consumption as compared to LTPS, or low-temperature polysilicon, resulting in extended battery life on future iPhones and Apple Watches.

Apple is also relying on display manufacturers to produce AMOLED panels for its iPhone. Why, then, would Apple develop LTPO backplane technology without the assistance and involvement of the display manufacturers who are its partners? In our analysis, we believe this is because Apple in the long term may want to have more control over components of the flexible OLED.

There are several reasons for Apple to introduce LTPO:

Currently, Apple sources flexible OLED panels exclusively from Samsung Display, but LG Display may emerge as a second supplier as it aims for qualification