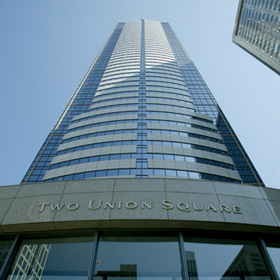 The total space leased by Apple is about 30,000 square feet, enough for 120 to 200 employees based on standard corporate leasing ratios. Of the 56-story Two Union Square office tower, Apple is said to be taking the 44th floor and half of the 45th floor.

As Bloomberg points out, Apple is joining other Silicon Valley companies such as Facebook, Google, and Alibaba Group Holding by extending its presence in Seattle. The area is said to have a lower cost of living and an attractive talent pool.

Apple opened its first office in Seattle last year, but this year — while building its new headquarters in Cupertino, the Apple Campus 2 — it is expanding its presence in multiple cities. Earlier this month, the Silicon Valley Business Journal reported that Apple has agreed to lease office space in San Jose.

The company is on a hiring spree: it added 9,000 employees last year and now has more than 115,000 employees, according to the Bloomberg report.