Apple has officially announced the opening date for their new iconic store inside Grand Central Terminal in New York City. A press release issued this morning notes the grand opening will take place this Friday, December 9th at 10AM, ‘just in time for the holidays’.

This new store is massive and has two Genius Bars, and sports the largest Personal Setup area of any Apple Store in the world:

The Apple Store® Grand Central, Apple’s fifth store in Manhattan, will open Friday, December 9, at 10 a.m., just in time for the holidays. This one-of-a-kind Apple retail store overlooks the historic Main Concourse from the East and North East balconies of the world-famous Grand Central Terminal, and has two Genius Bars for free tech support and advice.

Convenient services at the Apple Store Grand Central include Personal Pickup, a feature of the free Apple Store App which lets iPhone® users shop and buy from anywhere they are, then pick up their purchase when they reach the terminal. Customers using the Apple Store App can even scan and pay for accessories with their iPhone using the new EasyPay function. And new 15-minute Express Workshops offer tips and tricks in a streamlined format to serve customers on a tight schedule.

The store’s expert team has 315 passionate employees who deliver these and other amazing services, which have become the hallmark of Apple retail stores worldwide.

Beyond the balcony overlooking the expansive Main Concourse, the Apple Store Grand Central offers rooms dedicated to some of our most popular services, including the largest area in the world dedicated to Personal Setup.

News of the store leaked in late July, as confirmed by the NYT and WSJ. AllThingsD has revealed a couple preview pictures of the store, opened early to the press: 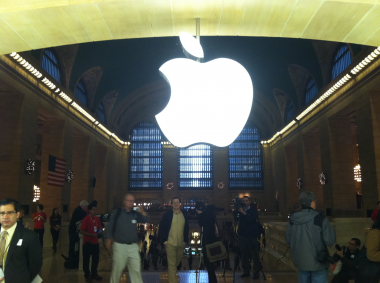 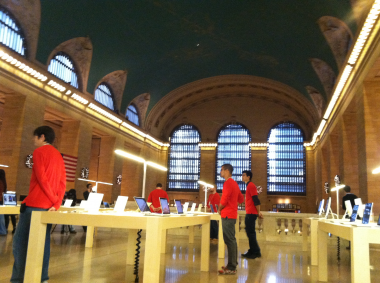 According to the AP, Apple has a 10 year lease for the space, notes Lauren Goode:

Apple signed a 10-year lease with the MTA for the space once occupied by Metrazur restaurant, which got $5 million from Apple to clear out early; and that unlike other tenants in the building, Apple will not be sharing revenue with the transit authority. At $180 per square foot, Apple is also paying slightly less than other tenants in the space, but the MTA has said that cost reflects the $5 million payment to the restaurant, plus Apple’s $2.5 million capital investment in the space and a $1.1 million annual rate.

Nevertheless, the next time you visit NYC, you will have a chance to visit the largest Apple Store in the world at Grand Central Terminal, and also the renovated 5th Ave ‘Cube’, which now sports even larger panes of glass.