Last month it was noted Apple’s social music network, Ping, was set to end on September 30th. Well, that day has come and gone. The social network was launched by the late Steve Jobs back in 2010 and managed to register 1 million users in 48 hours, but there was no real interest soon afterwards. Apple CEO Tim Cook listened to customer feedback and agreed to shut down the failed service.

Apple acquired app discovery service Chomp back in February for a reported $50 million dollars. A couple months later, the service was axed for Android and in June developers reported a change in app search results, hinting at Chomp’s influence. However, the most obvious changes occurred at the end of August with App Store search results taking on a new look, clearly resembling the ‘cards’ interface from Chomp.

Today, MacRumors notes Chomp has been shut down and the site URL forwarded to Apple.com, with no new app installs taking place either. Existing iOS users are greeted with the following message that the service was discontinued yesterday: 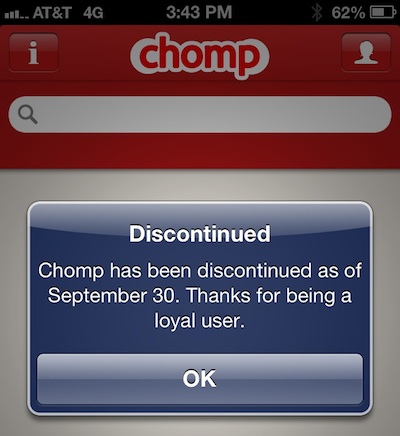 That’s all she wrote for Chomp. What do you think of its influence in today’s App Store?