How Do Apple’s Offshore Profits Compare vs Other U.S. Companies? [CHART]

Bloomberg reports the largest U.S.-based companies stockpiled an additional $206 billion in offshore profits last year, up 11.8 percent compared to a year ago bringing the total to $1.95 trillion, according to securities filings from 307 companies in the S&P500.

Almost 20 percent of that (18.2%) rise was from three companies: Microsoft, IBM and Apple. These U.S. companies hold their profits in offshore tax havens as repatriation of these monies would result in higher tax payments due to less competitive corporate tax rates in their eyes.

U.K.-based non-profit organization The Bureau of Investigative Journalism asked tech companies such as Apple “if they could justify a situation in which US taxpayers hand over interest payments to companies that are avoiding the immediate payment of US tax by keeping cash offshore rather than repatriating it.”

Apple did not comment, only to respond with bullet points mentioning the following:

‘We pay all the taxes we owe – every single dollar. We not only comply with the laws, but we comply with the spirit of the laws. We don’t depend on tax gimmicks. Apple carefully manages its foreign cash holdings to support its overseas operations in the best interests of its shareholders. Apple pays an extraordinary amount in US taxes.’

The answer echoes Apple CEO Tim Cook’s testimony before a US Senate hearing last year on the subject of avoiding US taxes on profits earned overseas.

Despite Apple typically dominating the tax avoidance spotlight, it does not lead the pack when it comes to U.S. companies holding profits overseas, according to the graphics compiled below by Bloomberg—but it’s on the rise. General Electric has $110 billion in offshore profits, followed by Microsoft, Pfizer, Merck then Apple: 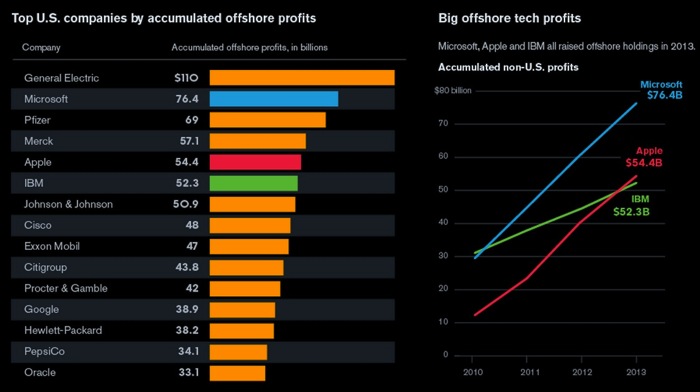 Over the past three years, Microsoft and Google’s offshore profits have more than doubled, while Apple’s has more than quadrupled. With a 35 percent corporate tax rate in the U.S. it doesn’t appear profits will be shifting home anytime soon, especially when tax havens such as Ireland offer rates of 12.5 percent. The latter has worked to fix its reputation as a tax haven while an OECD action plan proposed last year plans to revise corporate tax regimes to limit tax avoidance practices.