In an attempt to block the trademarking of bottled water business Georgette LLC’s logo, Apple has filed a notice of opposition with the Trademark Trial and Appeal Board, claiming that its brand will be damaged if the applicant’s logo is registered, MacRumors reports. 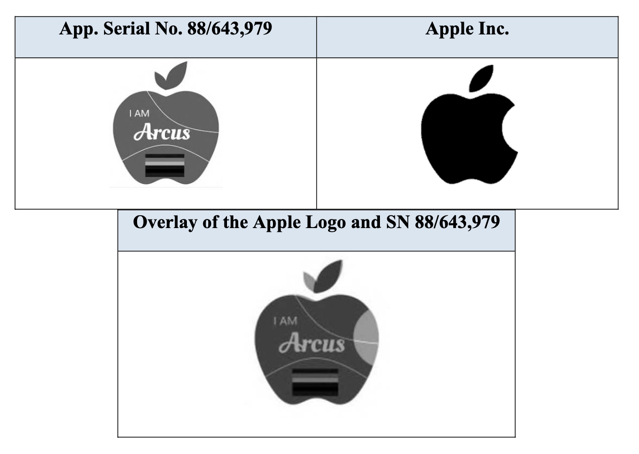 As opposed to Apple’s iconic logo, which features a bite out of its right-hand side and a single leaf, Georgette’s logo consists of a whole apple with two leaves and the words “I am Arcus” written over it.

Apple’s complaint notes that the applicant’s logo “features a stylized apple design with a right-angled, detached leaf, rendering it visually similar to Apple’s famous Apple Marks.” It adds that since 1977, the company has used its logo, which has gone on to become distinctive and gain a high level of consumer recognition and goodwill.

“Applicant’s Mark readily calls to mind Apple’s famous Apple Logo given the visual similarities, and the Apple Marks are so famous and instantly recognizable that the similarities in Applicant’s Mark will overshadow any minor differences and cause the ordinary consumer to believe that Applicant is related to, affiliated with or endorsed by Apple.”

Apple is seeking for its opposition to be sustained and for the applicant’s registration to be denied.

The case is yet one of many where Apple has tried to litigate against smaller companies with logos similar to theirs.