As pointed out by iMore, Microsoft has added support for Apple’s Passbook passes in Windows Phone 8.1, which was released today as a developer preview. It seems that Microsoft has “reverse-engineered how to read Passbook files (.pkpass)” and can turned them into cards that work with Micosoft Wallet, rendering them with the same data for Windows Phone users. 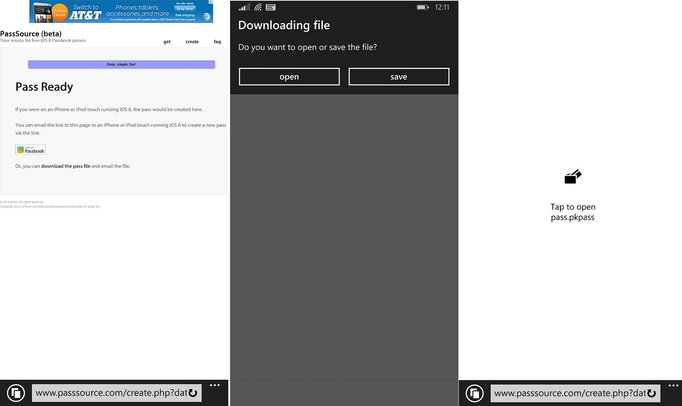 While the Microsoft Wallet may not support iOS-specific features like Passbook updates and notifications, it is being reported that the importing of data is pretty much accurate. In an ideal situation, Passbook would be universal and everyone could use and benefit from it no matter who manufactured their device or built their operating system. However, since this is a feature in a developer preview beta, it’s quite likely that it gets omitted from a final release.

“Passbook passes are just collection of data that get rendered into a card and displayed in Apple’s Passbook app. Think of the Passbook files like the HTML, CSS, and JavaScript data that makes up a webpage, and the Passbook app like the browser that renders the actual page. It looks like Windows Phone 8 is taking the same data and rendering a similar card out of it, and then pushing that card to Microsoft Wallet.”

It must be noted that Apple has always advertised Passbook as a feature that adds to the value of the iPhone and the experience of iPhone customers. Do you think Apple would put a stop to Passbook support in Windows Phone when they find out about this?

After iOS 16.1 beta users discovered Adaptive Transparency enabled for the original AirPods Pro and AirPods Max, we’re now finding out this is actually a “bug”. That’s according to what Bloomberg’s Mark Gurman shared on Monday morning, citing the MacRumors report. “I’m told this is a bug,” said Gurman in his retweet. He later clarified the […]
Gary Ng
58 mins ago