When it comes to the 2017 iPhone, sources agree that Apple will use OLED display. That, however, doesn’t stop the company from exploring other technologies and the Quantum Dot LED or QLED, which is similar to OLED, is theoretically able to deliver more vibrant colours, and consume close to 50% less power than its OLED counterpart.

Because of this, Apple is very interested in the technology. Plus, it also has the potential to be used in a display that could wrap around your wrist like a watch band. Patently Apple has spotted Apple’s patent application 20160218252 for “Display Light Sources With Quantum Dots,” which as described in the abstract, generally relates to electronic devices with displays and displays’ light sources.

The background of the patent outlines the challenges of QLED displays it aims to solve: “Quantum dots and phosphors can be sensitive to moisture and oxygen. Quantum dot lifetimes can also be adversely affected by exposure to high pump light intensities and elevated temperatures. Quantum dot performance is also affected by the type of structures used to form the quantum dots.” 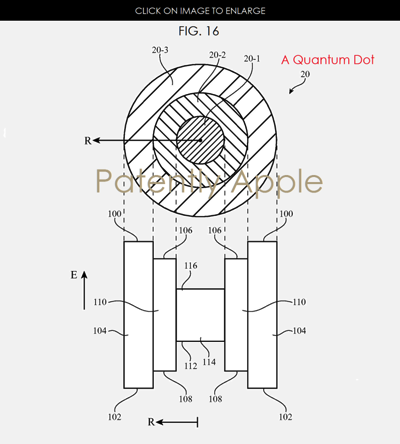 The patent describes a method Apple engineers Jonathan S. Steckel, Sajjad A. Khan, and Jean-Jacques P. Drolet (the inventors credited for the patent application) propose: Quantum dots may be formed from semiconductor layers that are doped with n-type and p-type dopant to adjust the locations of the conduction and valance bands in the layers of the quantum dots, thereby enhancing quantum dot performance.

If you are interested in the technology, you can read the full patent description by following this link.