While flip phones may have died out years ago with MySpace, a patent awarded to Apple this week may just bring them back. According to a new report from Patently Apple, the company’s patent describes a system that uses carbon nanotubes for signal paths in a flexible circuit, which could form the basis of devices that can bend along a seam, even the display itself, without damaging the circuits. 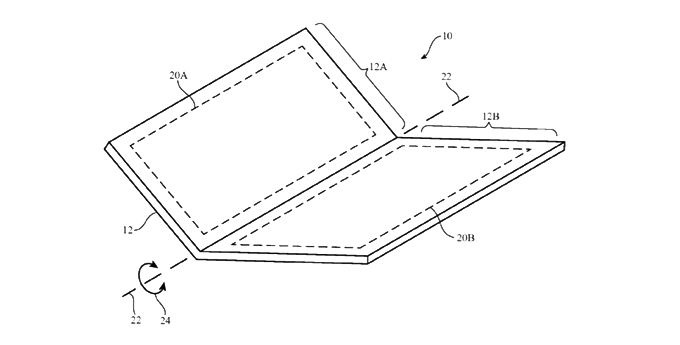 Flexible electronics have begun to show up in patents and prototypes in different forms. LG has been showing off its brand-new rollable OLED screens for a couple of years now. Flexible circuitry, which may be a large part of future devices, could be made of liquid metal or graphene.

Apple‘s patent, which was filed in August 2014 and awarded just this week, is for a very specific part of a potential flexible electronic device. The patent application focuses on the circuits themselves, proposing that carbon nanotubes could be patterned in a way that forms flexible signal paths. These carbon nanotube circuits would then be embedded onto equally bendable substrates (essentially, the base layer that holds circuitry).

In diagrams that accompany the patent application, Apple imagines a device that bends along a single seam like a laptop, but also points out that multiple seams could allow a device to fold up in different ways. However, the technology has wider implications than electronics designed to be repeatedly bent by the user: the company suggests that the technique could allow circuits that are made with a permanent bend, allowing components to be crammed into unusually-shaped devices.

Should this patent come to fruition, it would open the doors for all kinds of applications, with Apple detailing a long list including smartphones, tablets, laptops, wearables, gaming devices, TVs, navigation devices, vehicle dashboard displays, and kiosk equipment.

Since this is only a patent, one can not be sure whether it will see the light of day. At this point, only time will tell.