Following the release of the iPhone 6s and 6s Plus, industry sources claimed the next-generation iPhone would be waterproof. A recently granted Apple patent has just given us another reason to believe Apple could walk this path.

The US Patent and Trademark Office granted Apple US Patent No. 9,363,589 for a “Liquid resistant acoustic device”, which describes an audio port protected by a specialized mesh “umbrella” or other structure that resists the entry of liquid. As noted by AppleInsider, this system seems to match that of the one introduced with the Apple Watch, which isn’t waterproof but is water resistant.

Here is how the patented “mesh” umbrella works:

The acoustic module is coupled to its host device by an o-ring or similar mechanism, thus creating a tight seal. When liquid passes through the housing apertures it makes contact with the protective mesh umbrella and is directed away. This flow might reduce pressure on the mesh layer, thereby lowering the potential for damage. Apple notes the mesh may in some configurations be allowed to pass a certain amount of liquid at significant pressure to avoid structural harm.

While the rumour mill suggests the iPhone 7 could be waterproof, it is still unclear whether Apple will add this patented feature to the device when it launches this fall. 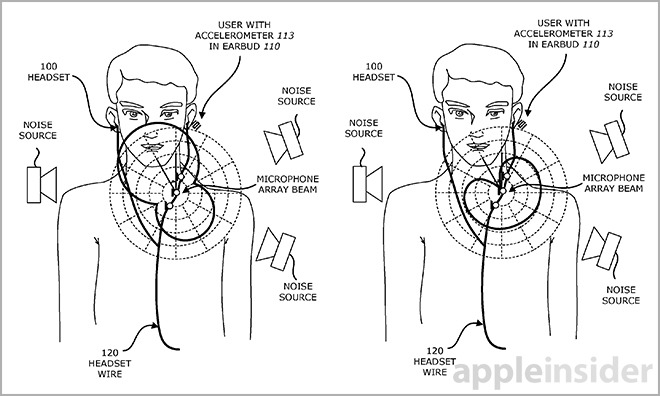 Another patent for “System and method of mixing accelerometer and microphone signals to improve voice quality in a mobile device”, discovered by AppleInsider, describes a headset that relies on bone conduction technology to filter out ambient noise.

As the patent abstract summarizes, the accelerometer built into the earbuds is able to detect the vibration of the user’s vocal cords filtered by the vocal tract based on vibration in the bones and tissue of the user’s head. Combined with an onboard microphone, the patented system is able to measure output signals and parse out ambient noise.

Output from both the accelerometer-based voice activity detector and the microphone that monitors acoustic signals for a user’s voice are compared and run through noise-cancellation processing to output a clean signal for transmission.