The U.S. Patent and Trademark Office has just awarded a new patent to Apple, which reveals how a graphical user interface (GUI) offers a solution to inadvertent input errors users may see when interacting with the iPhone’s touchscreen while moving. According to AppleInsider, the patent titled “Variable device graphical user interface” describes a system where user movement is compensated for via software adjustments. 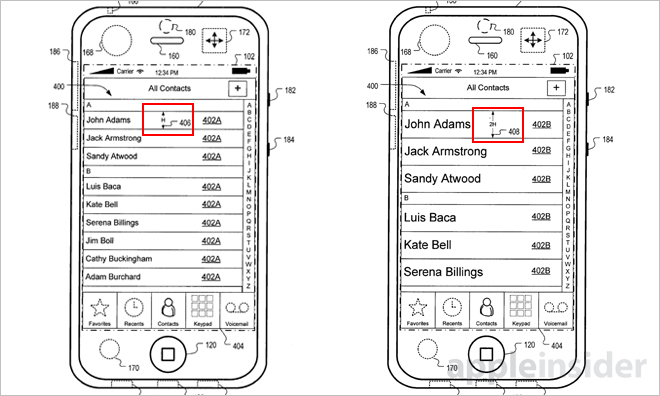 Apple’s invention looks to solve a common problem many iPhone users face when using the device while moving, such as walking or performing other activities that cause the bobbing motion. To compensate, Apple notes that one or more sensors can be used to detect device motion or patterns of motion, which will trigger dynamic UI changes like enlarging a virtual button’s touch area or shifting visual assets around the screen.

Apple mentions accelerometers, gyroscopes and more as adequate on-board sensors, most of which are already installed on current iPhone models.

Changes in metrics such as device acceleration and orientation can be used to interpret the motion of a device. More importantly, patterns can be detected and matched to a database of predetermined criteria. For example, if the device senses bobbing, it can be determined that the user is walking. An oscillating motion may denote running, while minute bounces could signal that a user is riding in a car.

According to some implementations, the system will resize UI elements and touch areas to compensate for a certain motion. In another embodiment, the UI can be skewed to compensate for angle of hold. Apple also adds that the system is able to “learn” particular characteristics of device motion and how a user’s touch accuracy relates to said movement.

Apple’s variable device GUI patent was first filed for in 2007.