Docks have been present in the Apple Store’s accessories list, but while Belkin has a couple for sale, we haven’t seen a dock manufactured by Apple itself for the iPhone 6 or iPhone 6 Plus, for example. A new patent, however, reveals that Apple has been busy taking these docks to the next level, adding a display, advanced gesture controls, and even the inductive charging introduced with the Apple Watch (via AppleInsider).

The Apple patent for a “docking station with audio output” details a dock that is basically a charging stand with a Lightning connector insert that supports one or more accessories: you can charge one accessory by inductive charging while another device is plugged in.

As described in the patent, Apple is playing around with a dock that could display data taken from the attached iPhone or other accessory: time, weather, news, and other information. What’s more, Apple is tapping into the so-called Internet of Things with this new dock, as the built-in capabilities can be used to control connected devices such as coffee makers, locks, lighting, appliances, and thermostats via HomeKit. 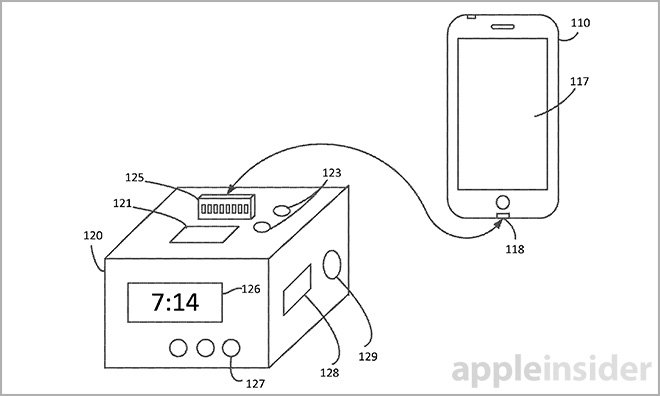 Apple’s imagined dock also includes gesture control, an area in which Apple has shown intense interest as of late. Using proximity sensors, users would be able to a perform range of operations through midair hand gestures, including turning the display on or off, and selecting onboard functions like cycling through news content.

In another embodiment, the invention serves as a docking station with data receptacles covering a gamut of interconnect technologies, such as USB, HDMI, DVI, Thunderbolt and more.

According to the patent, the multicoloured LEDs can inform the user about the docked device’s status and may even light up when a user approaches the dock, illuminating hard-to-see buttons and ports.

As with every patent, it is unclear whether Apple will indeed manufacture the device, but since the Apple Watch uses inductive charging, it could be something we are going to see on the Apple Store’s shelves in the future.